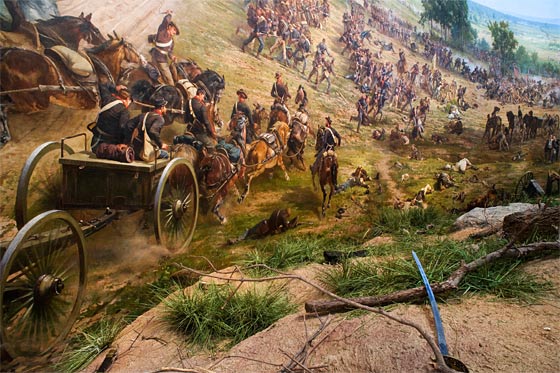 Most of us love going to the movies. Whether we are there to be entertained, enlightened, or to be exposed to other worlds, we love sitting in the darkened theater to “be told a new story.”

One hundred and fifty years ago people had the same desire to see, to think about, and to be entertained by stories. But of course, there were no films then, not even silent movies.

There were, however, cycloramas.

Cycloramas were huge panoramic paintings that generally depicted major historic events. Many were 40-50 feet high and 300-400 feet long. They were intended to be shown in a specially-built cylindrical room.

The first cyclorama was painted by an Irishman, Robert Barker. Barker who was said to have climbed to the top of a hill near Edinburgh and was so awed by the view that he determined to create a way to depict a similar view artistically.  Other painters followed and perfected the art.

The audiences that came stood on a central platform and could examine the enormous painting encircling them. To add meaning to the experience, a guide would narrate the story of what was happening in the painting. Many of the cyclorama companies also employed a piano player so there was a musical accompaniment.

The overall effect was to make audiences feel they were in the midst of the action.

As the art of creating cycloramas became more widely practiced, their creation proved to be quite complex.

Teams of specialized workers were necessary. Some workers prepared the huge canvas. Others erected the scaffolds. Next, a team of artists arrived to work. Landscape painters worked on the backgrounds. Then additional artists came in to paint humans, horses, and artillery. They moved from section to section of the painting, adding in the art they did best.

To provide visitors with a “you are there” feeling, the artist/designer needed to make some sophisticated adjustments in perspective.

Special buildings were created to display these paintings. Some locations hired additional craftsmen to create scale-model dioramas that depicted action from the painting. This gave the audience an even richer experience. 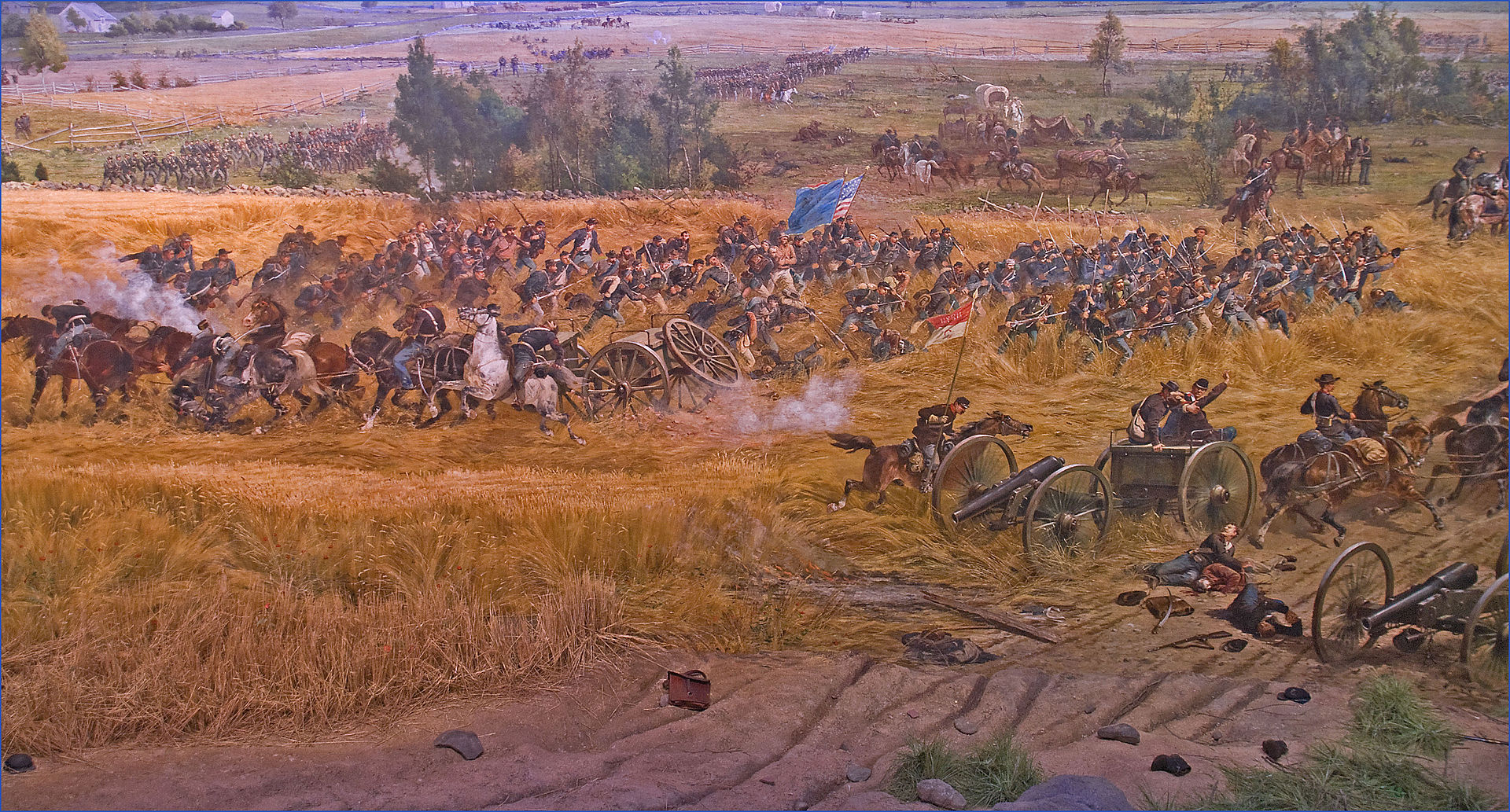 As more buildings were erected for the display of these paintings, the cycloramas began to be designed so that they could be taken down, rolled up, and transported to a new location. Just as reels of film used to be sent from theater to theater, the same type of trading went on with the cyclorama paintings.

Cycloramas became so popular that communities that did not have special buildings for their display came up with a method to show them. Standing at the front of a regular auditorium, men were hired to unroll the painting scene, says Pulitzer-Prize winning Civil War historian James M. McPherson. A narrator described the action.

As battlefield cycloramas grew in popularity, Paul Philippoteaux (1846-1923) became the best known artist for designing and painting these immense works.  After he produced several of them depicting European battle scenes, an American merchant commissioned Philippoteaux to paint the “greatest battle of the Rebellion,” Pickett’s Charge.

In the early 1880s, Philippoteaux traveled to the United States to visit Gettysburg and interview some of the soldiers who were still living. In addition to sketching what he saw, he hired local photographer William H. Tipton to shoot a series of photographs that would provide more detail.

When he returned to his salon in Paris, Philippoteaux pasted the photographs together in sequence. This gave him a blueprint for the background for the cyclorama.

Philippoteaux had a team of craftsmen working with him. The painting took a year and a half to complete. When finished, it was about 100 yards long and weighed nearly 6 tons.

Philippotoeaux’s first showing of “Pickett’s Charge” was in Chicago where a theater had been built for it. Audiences were enthralled. During that first year, over a half million people visited.

As a result of this success, Philippoteaux was commissioned to paint a second one. It was sold to a company that placed it in Boston. Eventually, four versions of this work were created.

Guides at the time were generally military men who had been in the battle. Their narrations were subjective and may not have been fully accurate, but the stories likely thrilled audiences.

One fellow who saw the Boston cyclorama in 1885 wrote: [It’s as if…] you can see for 15 miles all-around. Thousands and thousands of soldiers–horses–cannon–everything in a battle–about 40 feet on every side of you …” according to The Battle of Gettysburg Cyclorama by Sue Boardman and Kathryn Porch.

The Town of Gettysburg

Because the buildings necessary for displaying a cyclorama were so specialized and expensive, Gettysburg did not have a way to show the painting for a long time.

Then in June 1912, the Gettysburg Battle Picture Association received a charter from the Pennsylvania legislature to erect a specialized building. The building was completed by 1913, and “Pickett’s Charge” was finally displayed in its rightful place.

The Gettysburg cyclorama was a gift from department store magnate Albert Hahne. He first displayed the panoramic painting in the Grand Court of his Newark department store, Hahne & Company. While there, Hahne also arranged for it to be photographed section by section. (These photos later proved to be an invaluable resource for restoration of the painting.) 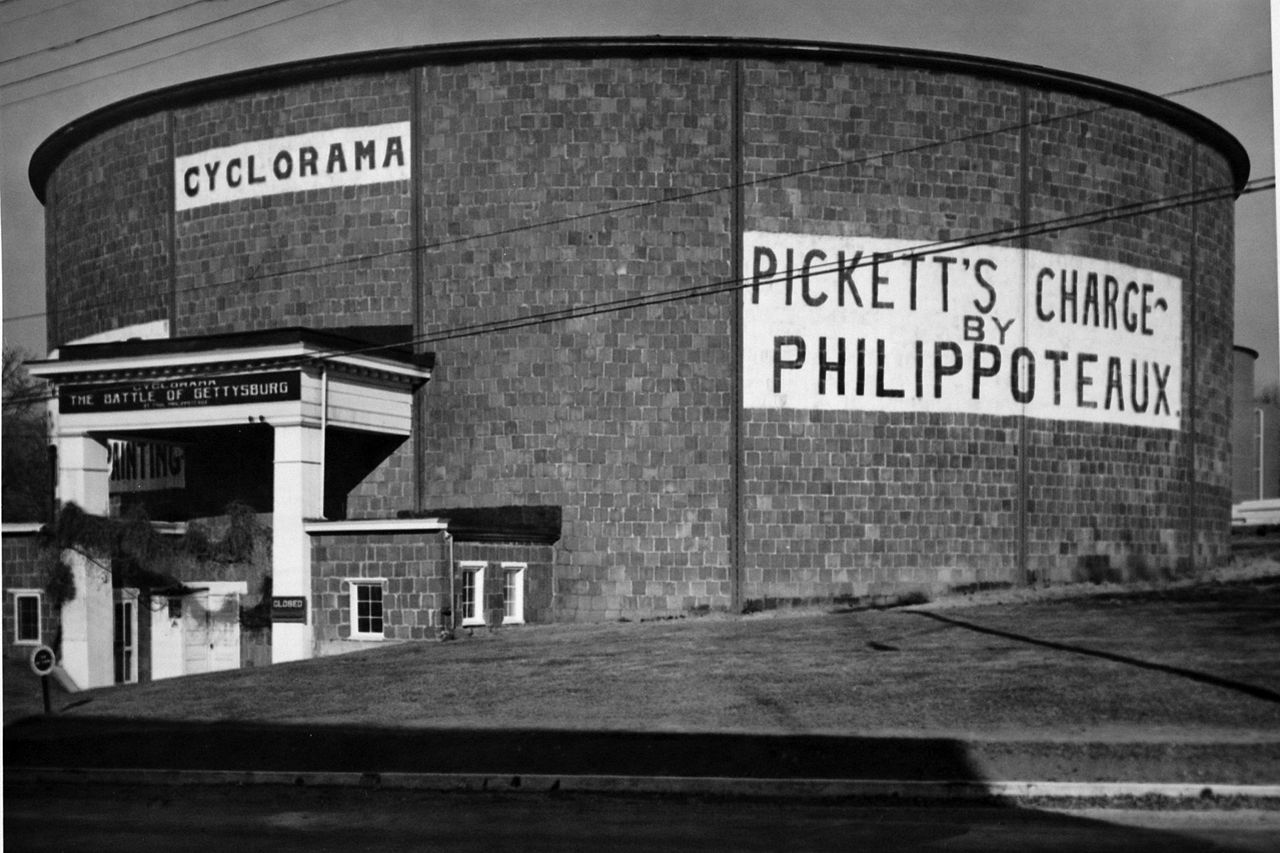 From 1913-1962, Pickett’s Charge was displayed at Gettysburg in the building that had been intended only as a “temporary home.” A leaky roof and no climate control led to deterioration of the painting, but at the time there was no money for a solution.

In 1948, some emergency repairs were undertaken, but because the painting remained in the same decrepit building, more damage occurred. The cyclorama endured more indignities in 1959 when restoration crew came in and caused more damage.

Finally, in 1999 park superintendent John Latschar put together a plan to preserve the painting. As Latschar worked on an overall plan for the tourism site, he included a new building.

The painting was sent out for multiple cleanings and extensive restoration. Battlefield Foundation president Robert Wilburn pulled together contractor Robert Kinsley, conservator David Olin, and a team of historians and artists worked to bring the painting back from ruin.

Today anyone who sees it is in awe. The painting is in beautiful condition, and the new building safely shows it off well.

Though about 30 cycloramas still exist, very few are displayed. In Atlanta, the Atlanta History Center displays “Battle of Atlanta.”

Visit Gettysburg and the Cyclorama 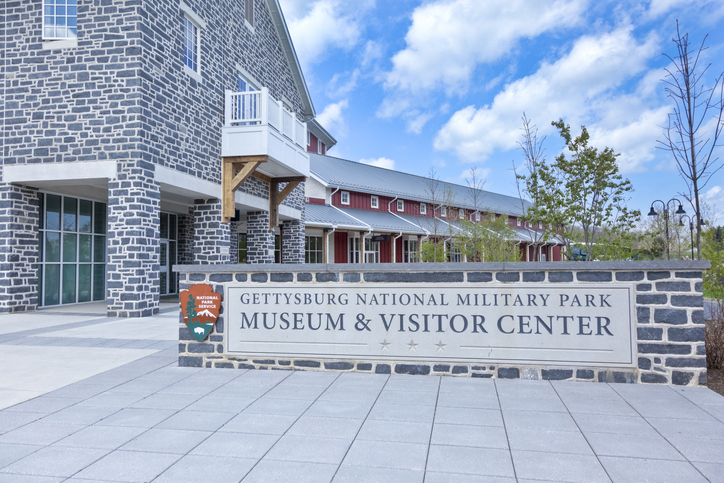 Come experience it for yourself: http://www.gettysburgfoundation.org/

As President Abraham Lincoln concluded in the Gettysburg Address, the Civil War was a “new birth of freedom” so that “government of the people, by the people, for the people, shall not perish from this earth.”

For more stories of the Civil War, see “When Heroes Had Hooves” and “The Little-Known Story of the Gettysburg Address.”

My primary source for this article was an in-person interview with Sue Boardman, a Licensed Battlefield Guide and an author and historian. Sue provided me with many documents about the Battle of Gettysburg as well as Paul Philippoteaux, the artist.

Her book was also invaluable:

The Battle of Gettysburg Cyclorama: A History and Guide.

“Saving the Imax of Its Day,” by Harold Holzer, American Heritage, August/September 2005.

2 thoughts on “The Gettysburg Cyclorama: The Movie of Its Day”