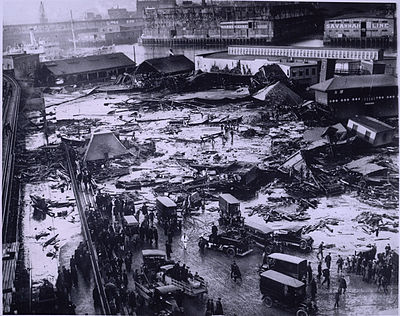 When we think of potential disasters in the Northeast during the winter months, we think of snow-related problems, but on January 15, 1919, the force that Bostonians had to reckon with was fiery hot molasses.  Twenty-one people died and scores were injured when hot molasses burst from a huge vat in an industrial building near Boston harbor.

At the time, molasses was the standard sweetener used in America; it could also be fermented to produce rum and ethyl alcohol, which could be used in making munitions.  The tank that burst and released the hot syrup was 58 feet high and filled with 2.5 million gallons of crude molasses. The accident occurred around noontime.

Unfortunately a combination of factors led to the disaster.  Research afterward showed that the tank had not been properly pressure-tested. Residents were well aware it leaked as they often took advantage of the oozing molasses. The weather was unseasonably warm for a January day, and the heat may have added to the problems. Without warning, the bolts holding the bottom of the tank exploded, and an eight-foot-high wave of molasses pushed through the building and down the streets, moving at about 35 miles per hour.  The hot wave of goo knocked over buildings and pushed down support beams for the elevated train line. Bystanders said the roar and feel of the wave of molasses was like that of a train hurling past.

The first to arrive on the scene were 116 cadets from a training ship in the harbor.  Rescuers had difficulty moving through the sticky substance, and often the sign of a survivor was the ghastly view of a thrashing mass of something trying to get out of the syrup.  They searched for four days until they were certain nothing could have survived.

In all, 21 people and dozens of horses and dogs were killed in the flood.  It took weeks to clean the molasses from the streets of Boston, and the harbor stayed brown for another eight months.

Today the site of the disaster is a recreational complex with two parks and a Little League field.  A plaque about disaster is placed outside one of the parks, and when the tour guides on Boston’s Old Town Trolley come through the area, they often refer to it as the “Boston Molassacre.”

A weather-related disaster is described in “The Schoolhouse Blizzard.“

3 thoughts on “The “Boston Molassacre””