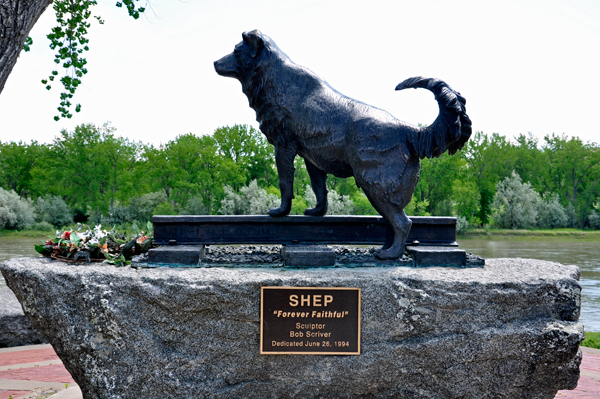 If you have ever visited Fort Benton, Montana, then you have seen the monument to “Faithful Shep” that sits above the river alongside the train tracks.

The most often-told version of the story notes that in 1936 a dog was first noticed at the Great Northern Railway station in Fort Benton one day when a casket was being loaded on to a train going east from Montana, and that the dog kept greeting incoming trains for years afterward.

In the late 1930s, conductor Ed Shields pieced together more details of the story, and more recently, Fort Benton historian Ken Robison has written about it, making the story much more understandable. Robison writes that the dog was first spotted outside St. Clare Hospital in Fort Benton; an ailing shepherd had come in for care earlier in the day. The shepherd did not live long, and his family requested the body be sent east to them, so a nun arranged for the casket to be picked up and taken to the train.

Robison reports that people noted that a dog watched as the body left the hospital, and he followed the truck carrying the casket to the train. When the casket was placed inside the rail car, the dog whined and pawed at the door.

The dog remained at the station, sleeping under benches most of the time but coming out each time a train pulled in. Only

over time did he begin to warm to the station employees; they fed him and watched out for him, calling him “Shep” since he was clearly a herding dog. Shep actually became quite famous and was even mentioned in Ripley’s Believe It or Not column. Though there were offers from people all over the country who wanted to adopt Shep, the station employees knew that the dog wanted to remain at the station on his vigil.

Shep grew older, and on January 12, 1942, he did not seem to hear an oncoming train. The engineer saw the dog on the track but was unable to stop, or Shep may have slipped on ice or snow in trying to get off the rails in time.

Shep’s funeral was held two days later, and the entire town was said to have come to honor Shep. Pall bearer duties were split between station employees and several boy scouts. Shep was buried on the bluff overlooking the station.

Shortly after Shep’s death, Ed Shields, the conductor who teased out details of the story, began to sell a booklet about the faithful dog, and he wanted something good to come as a result of a story that was so sad. He decided an appropriate action was to donate the proceeds to the Montana School for the Deaf and Blind. It is estimated that the Shep fund had brought in over $100,000.

I called the school this week, and the fund is still active. Donations in memory of Shep can be made to the Montana School for the Deaf and Blind, 3911 Central Avenue, Great Falls, MT 59405.

In memory of the 50th anniversary since Shep’s accident, the town commissioned a bronze sculpture of Shep. Today it sits on the bank of the Missouri River, near the train tracks. A historical marker tells of Shep’s vigil. Boy Scout Troop 47 still cares for Shep’s memorial and grave site.