The First International Transcontinental Foot Race was held in the 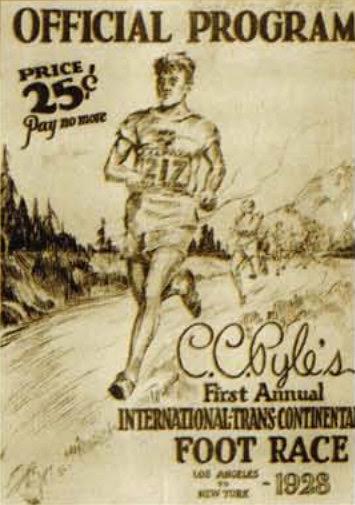 United States in 1928. The event was organized through the combined efforts of the Route 66 Association and sports promoter, Charles C. Pyle. The purpose was to build interest in the newly opened Route 66—a road that was being described as the “highway that connected the nation.”

For the first time, a series of roads had been created to link the United States from coast to coast. Route 66 itself only ran from the Pacific Ocean to Chicago but once in Illinois, there were several roads that could take travelers east.

Though Route 66 had been proclaimed “open,” it was still rough going for cars. Only one-third of it was paved, and the unpaved sections were barely more than leveled roadway often filled with numerous potholes. There was little signage and no maps at that time, so drivers were understandably nervous about undertaking a cross-country road trip. 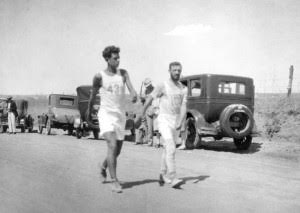 raise the funds to continue with paving and other road improvements.  This was how promoters came upon the idea of a foot race. If men could run the roads, then certainly cars could drive on them!

Any physically fit male athlete from anywhere in the world could enter the race.  As a result, 199 men registered, and about ten percent of them were non-white. About 15 were Latinos, Native Americans, or Pacific Islanders; one was a Jamaican-born Canadian, and five were African-Americans.

While the idea of a cross-country race that might take two-three months may seem bizarre to us today, endurance tests of various types were very popular in that era. Whether it was a dance marathon, a bicycle endurance race, or a run, these contests offered opportunity for farm boys and blue collar workers to earn money they could never dream of making in their regular jobs.  The Transcontinental Footrace was no different. The prize money ranged from $25,000 for the first-place winner to $1000 for the 5th-10th place finishers.

From Los Angeles to Chicago, the route was easy—the men would simply follow Route 66. After they reached Chicago, C.C. Pyle had some choices to make since roads were more plentiful. Businessman that he was, Pyle decided the best method was for cities and towns to pay for the opportunity. Unfortunately for the runners, this did

not create the most direct way from L.A. to New York. Once the route was ultimately mapped out, the distance covered was to be 3422.3 miles.

On March 4, 1928, 199 runners started out from Los Angeles’ Ascot  Speedway. Runners were to achieve a certain distance each day, knowing that food and bedding would be available to them at the planned-for stop. The first overnight break was Puente, California, only 17 miles away. The slow pace was merited by the crowds—an estimated 500,000 people lined the roadway all along the way. Car traffic was heavy as reporters and onlookers angled to follow along to catch additional glimpses of the spectacle.

Runner John Stone, Jr. wrote a book afterward to clarify some of the rumors that were being reported about the event. In The Hells of the Bunion Derby, Stone noted that food was seriously lacking in flavor and in quantity.  The midday meal generally consisted of two jam sandwiches, a cup of coffee or milk, and a very small orange, wrote Stone. When they all stopped at night, bedding was distributed randomly. One runner might be given a pillow that another runner had dropped in the dust—they had no ownership of anything.

Pyle also failed to station enough people along the road to hand out water as the runners traveled. Generally, the water stations were 5-15 miles apart, something any runner knows would be unthinkable today.

Pyle, ever the promoter, had arranged for a carnival to precede the runners into most towns. This boosted interest in the race and the income from the carnival helped line Pyle’s pockets with cash. Among the attractions were an embalmed outlaw from Oklahoma, a human exhibit known as Turtle Boy, “artistic” female dancers, and a 20-piece jazz band.

The runners would go through California, Arizona, New Mexico, Texas, Oklahoma, Kansas, Missouri, Illinois, Indiana, Ohio, Pennsylvania, New Jersey, and into New York.  This path took them through a wide variety of climates and conditions. In the Mojave 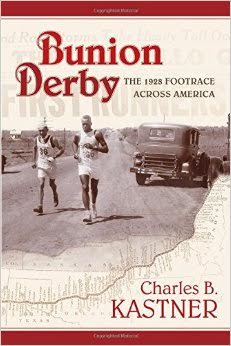 Desert the temperature hit 95 degrees most days, and in the mountain passes, many runners had trouble running in the thin air.

For the African-American runners, the Jim Crow South proved most challenging. Starting in Texas, Klan members followed them, taunted them, and made certain they slept in colored-only tents.  Finally in Oklahoma, the runners encountered large enough black communities where the people offered them places to stay and better food to eat.

Many runners dropped out simply because the conditions were so inhuman. Runners were getting badly sunburned, acquiring huge blisters and cracked lips, and very little medical help was available. Those who were wealthy had trainers, support cars, and could stay in hotels.

From Gary, Indiana to Liberty, New York Pyle began increasing the distances between stops. The men began being forced to run between 50-70 miles each day…a truly daunting pace. Sometimes it would take a runner until 2:30 a.m. to finish the daily regimen.

The last stop before New York City was in Passaic, New Jersey. One of the runners, John Salo, was from there, and the town pulled out all the stops to welcome the runners (New York Times, May 26, 1928). Salo, who was expected to finish in second place, was hailed as a local hero, and the town provided a parade, a ceremony, and a dinner for the runners.

While in Passaic, Pyle also arranged for the men to clean up before they entered Manhattan. Many shaved for the first time since beginning the race; their shoes were repaired, and they were generally made to look as good as they could after such a brutal 84 days.

On May 26 1928, 55 men of the 199 entrants entered Madison Square Garden where they were to run an additional 20 miles. While this must have seemed cruel and unusual for runners who had run so far in such a short time, Pyle must have seen it as a perfect promotional opportunity to draw crowds in the most populous city in the U.S.

The race was eventually won by a young Oklahoma Cherokee Indian, 20-year-old Andy Payne, who averaged 10-minute miles for the entire race.  According to Charles Kastner’s book, Bunion Derby: The 1928 Footrace Across America, Payne, like the other cash recipients needed the money for practical things like paying off the mortgage on the family farm or helping out with general family expenses.

For the most part, these were not entrants who were testing themselves for a good time; they were running because they needed the money.  Those that did not place in the race received a $100 refund from their $125 entrance fee.