“Almost totally missing from the traditional history of the American West is the role of the Black cowboy as well as other Black pioneers who traveled through and settled during the nineteenth century in the vast territory west of the Mississippi,” writes Bennie J. McRae, Jr. in a 1996 book, Lest We Forget.

History books and Hollywood manage to expunge blacks from the historic record of the West, write McRae. He adds that of the estimated 35,000 cowboys that worked the ranches and rode the trails, about one-third (between five and nine thousand) were said to have been African American.

Many rode the Goodnight-Loving Trail in the late nineteenth century, yet the well-loved movie, Red River, depicts not a single black cowboy.

If there is one that is remembered, it is Bill Pickett who was both cowboy and performer. He showed tremendous skill with horses, and achieved fame for a technique he developed for steer wrestling, called “bulldogging.”

Bill Pickett’s actual birth year is uncertain, but he was the second of 13 children born to Thomas Jefferson Pickett, a former slave, and Mary “Janie” Gilbert. The family’s ancestry was African, white and Cherokee. 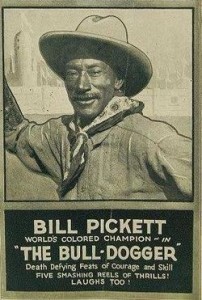 The family lived in an area of Texas known as Jenks Branch Community.  The land was settled by a family named Miller who then opened the land for other African Americans to come there after the Civil War.

Bill Pickett attended school through the fifth grade, after which he got a job on a ranch where he became a great rider and ranch hand.  Legend has it that Bill Pickett, was 5’7” and weighed only 145 pounds. He must have been all muscle.

In 1890 Pickett married Maggie Turner, a former slave and daughter of a white southern plantation owner. The couple had nine children.

By 1888, Pickett and his brothers started their own horse-breaking and cowboy services company in Taylor, Texas. The company was known as the Pickett Brothers Bronco Busters and Rough Riders Association. Their advertisements promised: “catching and taming wild cattle a specialty.”

Invented the Art of Bulldogging

Bill Pickett frequently performed in local rodeos and became well known for “bulldogging.” Pickett developed this method based on the fact that bulldogs were sometimes used to help stop a runaway steer.  The dog used its teeth to clamp down on the steer’s upper nose and lip. This is a sensitive area on cattle. Once the dog snaps down on the lip, the steer doesn’t move after that.

Pickett decided that if a bulldog could bring down a steer, so could he. He practiced by riding after a steer, springing from his horse, and wrestling the steer to the ground. He then bit and held the steer’s lip himself until the steer held still. He became known as the “bulldogger.”

Pickett gave exhibitions in Texas and throughout the West usually riding his horse Spradley.  In 1905, he signed on with the 101 Ranch Show (similar to Buffalo Bill’s Wild West Show) . In 1907, he joined the 101 Ranch full time.

The show was based in Oklahoma, so Bill and his family moved onto property owned by the 101. During the off-season Pickett worked as a cowboy and competed in rodeos around the West.

Because African American cowboys weren’t allowed to complete, Pickett registered as an Indian. There were still many times when he was banned.

Had he been able to compete on an equal basis with the white cowboys, Pickett might have become one of the greatest record-setters in his sport.

Pickett was also the first “Hollywood” black cowboy.  He worked with an all-black production company, Richard E. Norman Studios, and starred in Crimson Skull (1921) and The Bull-Dogger (1922), both filmed in Oklahoma.

The American fascination for Wild West shows and rodeos faded after World War I, and the 101 Ranch Show closed in 1931.

Pickett died in 1932 from injuries sustained while working the cattle on a ranch. He is buried near a 14-foot stone monument on Monument Hill in Kay County, Oklahoma.

Inducted into Hall of Fame 1971

Thirty-nine years after his death, Bill Pickett was inducted into the National Rodeo Cowboy Hall of Fame (1971), the first African American to receive this honor.

He was also honored by being selected to be featured on a 1994 U.S. postage stamp. Experts say the stamp actually depicts one of his brothers.

Thank you to William Wallace Kimball, a reader who was kind enough to contact me about the fact that he had photographs of Bill Pickett’s gun. Thanks to him for providing these additional photographs.