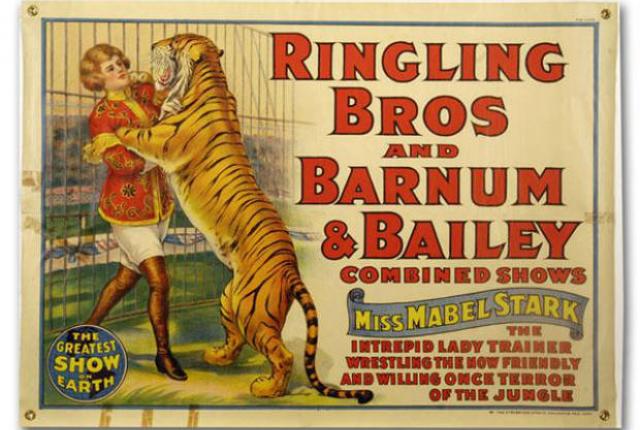 Mabel Stark (name at birth, Mary Haynie) was one of seven children born to a farming couple in Tennessee; the family may have moved to Kentucky during her childhood but Stark’s early years are hard to verify.

At age 17 she began training to be a nurse and got a job at a hospital in Kentucky. She either left nursing or took a part-time job as a carnival dancer (known as a “hoochie coochie” dancer). After a failed marriage, she returned to the carnival and when not working, Stark spent time with the menagerie overseen by Al G. Barnes. When he decided to start his own show, he invited Mabel Stark to come with him.

Al Barnes hired Louis Roth, a famous Hungarian animal trainer, who was first to use food and positive reinforcement to train the animals instead of violence. Stark worked as Roth’s assistant, and they married for a time, but Roth was a drinker and his act and his marriage suffered from it. Barnes fired him, and Mabel, whose own popularity was growing, divorced him.In 1913, she opened her own act for the Barnes circus, working with 10 tigers in the ring. It was the biggest act being done in the U.S. at that time.

Her trademark look was a white bodysuit.

Adopted Tiger Cub
At about this time, Stark adopted a sickly tiger cub and nursed him back to health. She found that Rajah, as she called him, was very affectionate, so she developed a way to encourage his behaviors to create a wrestling act. In Stark’s autobiography, Hold That Tiger (1938), she writes: “Rajah would run straight toward me. Up he went on his hind legs, his forefeet around my neck. We turned around once or twice, I threw him to the ground and we rolled three or four times. I opened his mouth and put my face inside, then jumped to my feet.” 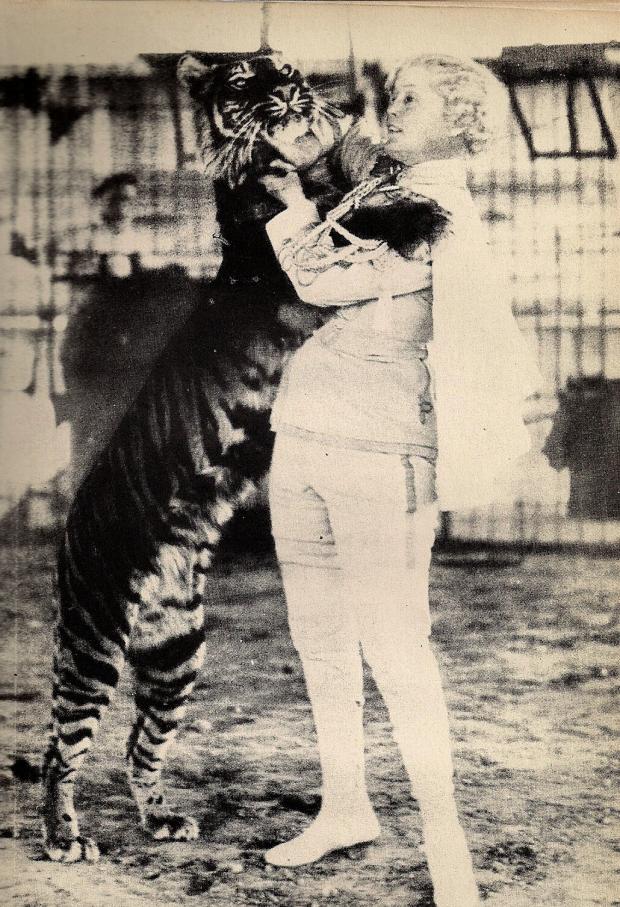 For audiences, the act was thrilling, even frightening. Word-of-mouth grew, and this brought the press. The reporters wrote about the act and that sold tickets. Mabel had made it to the big time.

“No Such Thing as a Tamed Wild Animal”

Mabel Stark had a simple theory about her success with animals. She saw each as having its own personality and temperament that a trainer needed to understand. “They can be subdued, but never conquered,” she said, and she liked nothing better than matching wits with them.

Ringling Takes Notice
In 1920 Ringling Brothers hired her away from Barnes and gave her the center ring. She gained all the status of a star with top billing and her own train car. At her peak, she performed with 18 tigers and a black panther.

She also married the circus accountant, but unfortunately, he was embezzling from the Ringlings. He was let go, so instead of helping Mabel’s career, he may have complicated it. In 1925 Ringling decided to terminate the cat acts.

The circus press agent stated that the reason for the change were that the cats were dangerous to circus personnel, and parents disliked the cat acts because they were too frightening. The steel cage was also difficult to set up and take down during the middle of the circus. 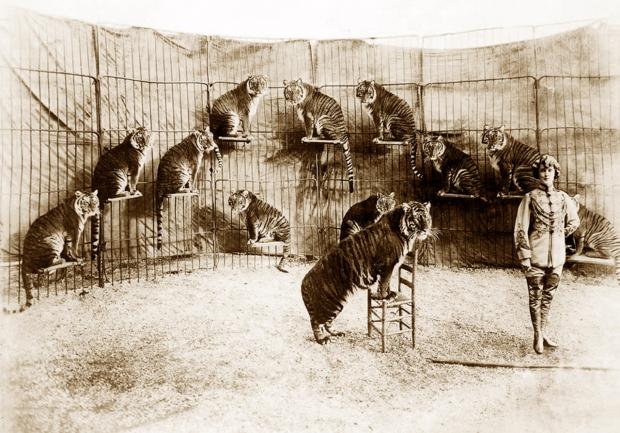 Stark suspected differently—that she was being punished for her connection to the embezzler. The Ringlings maintained cat acts in two of their stadium locations, but to run the acts they brought in newcomer Clyde Beatty.

Stark was still under contract, and she was placed in a horse act. She hated it.

One more love interest entered her life during the Ringling years. The menagerie boss, Art Rooney, was a fellow who had never dated and wore makeup and nail polish, but the two married and were very happy. Rooney died shortly after, so Stark’s one true romance came to a quick end.

In 1926 she was traded by Ringling to a medium-sized circus, the John Robinson Circus, and it was with this group that she suffered one of her worst maulings.

Danger in the Ring
In the nineteenth and early part of the twentieth centuries, trainers were sometimes injured seriously, even killed, in the ring. The cats were known to lash out with their paws, and while the cuts were not usually fatal it could leave nasty gashes. Other accidents could and did happen. 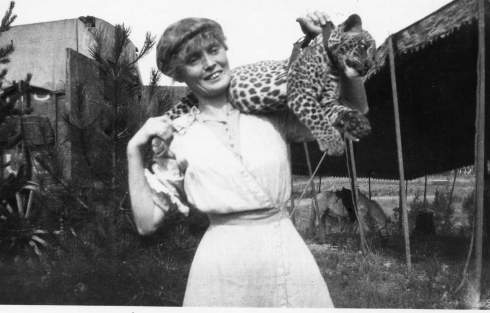 Each trainer took into the ring their own choice of training tools; Stark always used a whip and a stick, and sometimes a gun loaded with blanks.

In 1928 the Robinson circus train was fighting bad weather to get to Bangor, Maine for a performance, and the train pulled into town late. This generally would have meant cancellation of some of the animal acts since the animals wouldn’t have been fed or given time to calm down after the trip. Stark, however, decided to continue with her act.

As the cats entered the ring, one of the quiet ones took the wrong stool, angering one of the meaner cats, Sheik. Sheik responded by taking a severe swipe at Stark’s left leg, almost severing her lower leg. Her assistant, working outside the ring, started rattling the door, the signal for the animals to return to the entry tunnel. In the chaos, two cats arrived at the tunnel entrance at the same time. Sheik turned back and charged Stark who reacted by jamming the training stick into the back of the tiger’s throat. Another cat, Zoo, picked up on the disruption and also attacked.

Somehow Stark got her right hand free and pulled out her pistol, loaded with blanks, and fired directly into Zoo’s face. This permitted her to break free, though she passed out soon after and

was dragged from the performance ring unconscious. She was hospitalized and her injuries required treatment over about two years. However, within a matter of weeks, Stark returned to perform, now sporting bandages and using a cane.

In 1950 she suffered another particularly terrible accident; her right arm was severely mangled, meriting 175 stitches.

When injuries happened, Stark never blamed the cats: “I always blame myself—not the tiger…Maybe it is an ulcerated tooth, a sore paw, a grudge against the world for no good reason at all that has upset the cat.”

While anti-tetanus shots were available even during Stark’s early years of performing, it is particularly notable that she lived through so many incidents considering the depth of the wounds and the fact that penicillin was not commonly available until the late 1930s.

Mae West Stunt Performer
In 1932, I’m No Angel, starring In Mae West was being filmed. The character must perform in a lion-taming act, and of course, there was no better stunt performer to hire than Mabel Stark.

This brought Stark to Southern California where in 1938 she was hired full-time by Jungleland in Thousand Oaks, California. (When World War II began, Stark took time away from the cats to work at Lockheed Aircraft.)

In late 1967 Jungleland was sold, and the new owner disliked Stark, age 79, and fired her. The animals had to remain at Jungleland. After her departure, one of the tigers escaped and was killed as the men tried to re-capture it. Stark was angry and felt if she had been called, she could have gotten the tiger safely back to the compound.

Three months later she took an overdose of barbiturates and died. The ending of her autobiography, written in 1938, brings us as close as we will come to understanding why:

“Out slink the striped cats, snarling and roaring, leaping at each other or at me. It’s a matchless thrill, and life without it is not worthwhile to me. I hope each new season until my number is up will find me shouting, ‘Let them come!'”