George Tirebiter, a scraggly mutt, had the good sense to wander 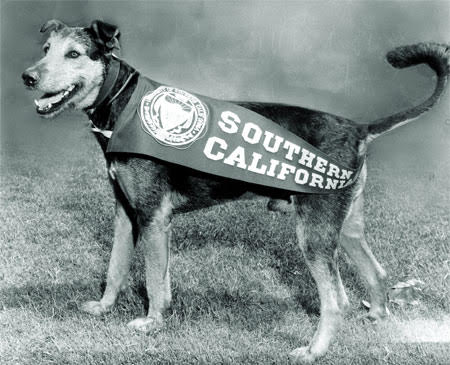 onto the campus of the University of Southern California in the early 1940s. He stayed around long enough that the students decided to make him mascot—a role he played with gusto for about seven years.

When Tirebiter arrived, he seemed to be a stray. Some say his owner lived nearby and had passed away, but no one really knows where the dog came from.  Whatever his origin, George Tirebiter arrived looking for free meals, companionship, and fun. At USC, a school known for its school spirit, he found it all.

His official mascot duties involved appearing at football games. Tirebiter led the Trojan band onto the field for each home football game. He was often wearing a USC sweater and cap.  He also appeared in photos with homecoming queens and sometimes rode in a parade car as one of the important school representatives.

His unofficial role sometimes involved coping with indignities heaped on him by the Spirit of Troy’s crosstown rival–the Bruins of the University of California at Los Angeles (UCLA).

There are many stories of where George came from, but only one story about his name. In the 1940s, University Avenue (now called Trousdale Parkway and a part of the campus now closed to vehicular traffic) provided a perfect place for George’s favorite hobby—chasing cars and biting the tires of the slower-moving ones. (He was said to take a lesser interest in bicycle tires.)

In 1947, before he was mascot, the students on campus for the summer session started a fundraising drive to collect money for Tirebiter to have a bath, a haircut, a nail trim, and a new collar as well as to pay for license renewal.

Perhaps that was the moment when the student body determined that George, their year-round eternal student, should be given a special honor.

official USC mascot. His coronation was celebrated with a campus-wide parade.  Just as the Hollywood stars placed their handprints in cement at Grauman’s (now TCL) Chinese Theatre, the USC festivities involved having George Tirebiter place his paw prints at the north entrance of the campus along with the footprints of SC’s All-American athletes and a favorite coach’s bow tie.

Shortly after he became the official mascot, he learned that the job was not all treats and games.

One night soon after he was named mascot, he was dognapped by several UCLA students. As the events unfolded, the next time he

appeared was with said UCLA students who brought him to the offices of The Los Angeles Times (11/1/1947) with the story of their “heroism.” They stated that they had found the dog on UCLA’s Westwood campus—just as he was—and they were doing a good deed by returning him to the Trojans. “Just as he was” involved a very dispirited Tirebiter: He had the letters, UCLA, shaved into his coat.

The students left the newspaper offices and seem to have simply deposited him on the USC campus where he was found, groggy, probably from being anesthetized for the shaving. (The Los Angeles Times reporter did not remark on his mental condition.) The Trojans took him to a vet where he recuperated.

The USC football team made it to the Rose Bowl that year, and George Tirebiter was there. He kept his sweater on for the duration of the championship game so that his maimed coat was not visible), but that didn’t help the team. The Michigan Wolverines defeated USC in a blowout (49-0). [From the L.A. Times, January 1, 1948.]

Tirebiter Had Trojan Fight In Him

Most of the time, Tirebiter could take good care of himself. One year

at a football game he was being teased by the fellow who was in a bear costume representing the UCLA Bruin mascot. Tirebiter didn’t like being teased, so he took a bite out of the mask, nipping off the nose.

The students also loved the story of the time that Tirebiter chased Berkeley’s bear mascot up a goalpost.

Though he had only been in his official role for a few years, George Tirebiter was getting elderly for a dog. As he aged, he became a bit ornery.  He sometimes nipped people as well as tires. That was a tough thing for the school to defend, so administrators told students they needed to find a home for him. The summer of 1950, a USC alum who lived on ranch in El Centro, California, offered to take him. That was good news for the USC Trojan family.

Sadly, however, there were tires to be bitten on the ranch, too. George Tirebiter wasn’t as spry he once was. In September 1950, he was happily chasing a vehicle when he was run over.

Upon hearing the news, the Trojan Knights—the group that had

taken charge of Tirebiter on campus–immediately scheduled a funeral. A caravan of cars, led by the Knights and the Trojan Band, paraded through the campus on the way to a shrine near where George Tirebiter had left his paw prints.  After the crowd assembled, TAPS was played. Then the USC student body president, Al Wiggins, stepped forward to deliver a eulogy:

“From the gutters of University Avenue and the alleys of Jefferson Boulevard came this scroungy mutt, whose spirit captured the imagination of 15,000 students [and] epitomized the spirit of Troy.”

The Daily Trojan wrote: “Gone to Heaven where he will have cushion rides for breakfast, white sidewalls for lunch, and cold rubber recaps for dinner.”

Immediately following the funeral, a campaign was undertaken to elect a successor. A good number of options were put forward, including, prophetically, the suggestion of a horse (a Trojan horse, of course).  But Hector, the horse, belonged to a stable and would have had to be rented for each use—a dog was much easier and much cheaper.

local doughnut shop owner and was also a mutt. Unfortunately, Tirebiter II became unnerved by the crowds at games and barked incessantly throughout.  By 1953 he was retired and Tirebiter III came in. Tirebiter III was also difficult to handle so he was given back to his owner.

George Tirebiter seemed to be irreplaceable. The mascot space was left empty until 1957 when a Tirebiter IV was selected. He served for one season and then went happily home with a professor, never to have to attend a game again.

By 1961 the Trojans welcomed their current and final mascot—a white horse called Traveler. The current Traveler (VII) is an Andalusian horse owned by Joanne Asman.

In 2006 the Blom family donated funds for a statue of Tirebiter, created by sculptor Michael Davis. The statue (a copy of the fluffier Tirebiter II) is on Trousdale Parkway, Tirebiter’s old tire-biting grounds, on the way from the campus to the Coliseum where USC plays its football games. Over time a tradition has arisen. In addition to kicking a light post before crossing the street, students also touch Tirebiter’s nose on their way to the games for good luck. Enough hands have touched the statue that the nose seems to be permanently shiny.

The plaque on the statue reads:

George Tirebiter: A Record and a Script 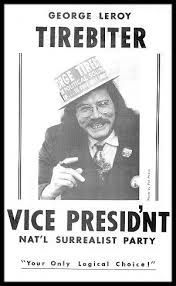 In addition to being USC’s first mascot, George Tirebiter I had the good sense to walk by the childhood home of David Ossman (1936-    ) who was to grow up to be one of four members of the comedy troupe, Firesign Theatre.

In one of Ossman’s early plays written for the group, he created an Everyman character named George Tirebiter. George was introduced in the 1970 recording, “Don’t Crush That Dwarf, Hand Me the Pliers.”  Tirebiter became a recurring character in additional stream-of-consciousness plays that the group recorded and performed on radio. Today you can still purchase the “The Geroge Tirebiter Collection,” a series of CDs put out by Ossman’s Otherworld Media.

SC Pooch Gets his Letters—but They’re All Wrong,” The Los Angeles Times, November 1, 1947.

“When Tirebiter was the Big Mutt on Campus,” by Steve Harvey, The Los Angeles Times, September 27, 2009.

“Bite On! Before Tommy and Traveler, There was Tirebiter,” by Dustin Jacobs and Ronald L. Olson, Trojan News, TFM.usc.edu