The invention of the bread-slicing machine eventually gave rise to the expression, “best thing since sliced bread.” 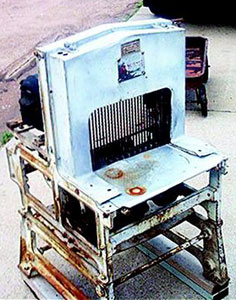 Who was the inventor? One might expect that a baker created the new device, but but the inventor was actually a jeweler: Otto Frederick Rohwedder (1880-1960).

By his early thirties, he owned three jewelry stores in St. Joseph, Missouri, and was quite successful.  But Rohwedder was also a tinkerer. He loved investigating how to improve machines he used in the jewelry business.

He did the same with other challenges in his life, always seeking a “better way.” This was how he came up with the concept of a bread-slicing machine.

When he realized he was close to a breakthrough on his invention, Rohwedder sold his jewelry stores to fund the manufacture of the machines. He believed he would be successful with the new device so he took a job as security guard to support himself while he worked on final changes.

In 1917, a fire in the factory where he worked destroyed the prototype of the machine as well as the blueprints. This set Rohwedder back by several years. He again had to raise funds and re-create the machinery.

He was also at work on a companion device. Because sliced bread becomes stale more quickly, he wanted to automate the wrapping of the bread as it came out of the slicer.

Rohwedder got back to work. In 1927, he came up with a device that sliced and wrapped the bread in one process. The first machine was sold to friend and baker Frank Bench. Bench installed it in 1928 at the Chillicothe Baking Company in Chillicothe, Missouri.

The first loaf of sliced bread was sold by the Chillicothe Baking Company that July.

The bread, advertised as “the greatest forward step in the baking industry since bread was wrapped,” caught on right away.

The pop-up toaster, invented in Britain in 1919 was just becoming popular in the U.S.  Americans were very interested in buying pre-sliced bread where the thin, even slices would fit easily into the new toaster.

Unfortunately, Rohwedder ran into trouble. His machine was so popular that his manufacturing plant couldn’t keep up with demand. As a result, other manufacturers began to encroach on sales. Then as the Great Depression settled in, Rohwedder was forced to sell the factory and his patents.

Surprisingly, sliced bread became part of war rationing, but for only a couple of months. In 1943, the War Rationing Board listed sliced bread among the items that were to be rationed. The reasoning was that it would reduce consumption of the waxed paper in which sliced loaves were wrapped.

Because steel was also rationed, the government did not want more bread-slicing machines to be made. Whether it was the concern over waxed paper or the idea that bread-slicing machines might continue to be made, the public was having none of it. There was so much public outcry that the government removed the ban. And the War Production Board was informed that there was plenty of waxed paper to supply the country for several years forward.

Today as much as 80 percent of all bread is sold sliced.

For another story on bread, click on Wonder Bread: The Most Famous White Bread.

2 thoughts on “Bread-Slicing Machine: The Inventor”