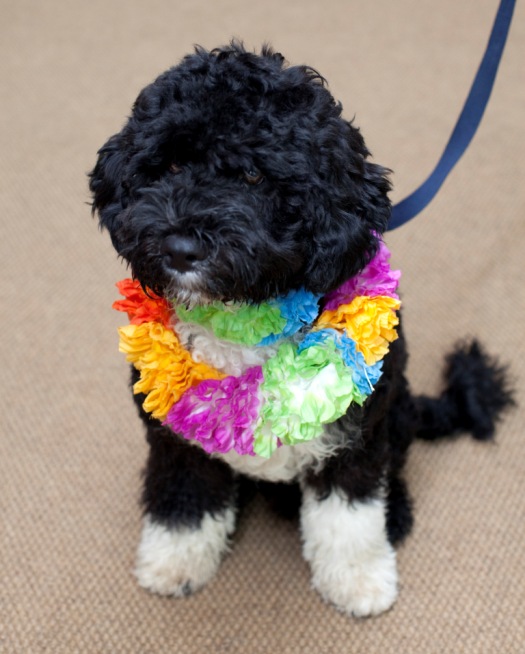 Few dog lovers will forget the words spoken on Election Night by President-Elect Barack Obama: “Sasha and Malia, I love you both more than you can imagine. You have earned the puppy that is coming with us.”

Throughout the campaign of 2008, Obama had indicated that win or lose, the one thing he could guarantee was that his girls would get a puppy after the election.

Though the Obamas had hoped to adopt a dog from a shelter, Malia’s allergies placed priority on getting a hypoallergenic breed. This led them to Portuguese water dogs. (While doctors dispute the reality of “hypoallergenic,” breeds like the PWD have hair not fur and don’t shed, so the likelihood of stirring up allergies is reduced.)

Portuguese water dogs were a breed favored by Senator Ted Kennedy, who was still alive at the outset of Obama’s term. As the family needs became known, Kennedy wanted to give the Obama children a dog from his breeder, Julie Parker. Bo, then called Charlie, was born to Penny (Amigo’s Phor What Its Worth); his father was Watson (Valkyrie’s Dr. Watson Is Here).

Bo had actually been placed with another family where it had not worked out, so he had been returned to the breeder as is the custom with pure-bred dogs. Kennedy arranged for his obedience trainer to work with Bo to assure that he would be welcome at the White House.

Bo officially arrived at 1600 Pennsylvania Avenue on April 14, 2009. His tuxedo coloring–black coat, white chest, and white front paws– made him an instant favorite with photographers, and the family clearly was thrilled with the joyful and energetic pup.

Bo’s full name is Amigo’s New Hope, but Malia and Sasha decided to call him Bo. Their cousins have a cat named Bo, and Michelle Obama’s father was nicknamed Diddley (as in Bo Diddley).

The Portuguese water dog is classified by the American Kennel Club as a working dog. They proved to be fine and enthusiastic swimmers, and many years ago, fishermen in the Algarve region of Portugal discovered the dogs could be taught to herd fish into nets, to retrieve lost tackle and broken nets, and to act as couriers from ship to ship, or ship to shore.

While Bo’s family encourages him to keep a low profile, he is occasionally seen by visitors to the White House. When Michelle Obama meets with schoolchildren, she is frequently asked about Bo, and from her descriptions, Bo sounds like a very normal and much-loved canine family member.

In May 2021, former president Barack Obama announced that Bo died and that he would be very much missed.