To read this patent application today is to be transported to a time before the name, Abraham Lincoln, carried such import—before he was the President who led our country through a war that literally could have torn the country in two.

The application begins: “Be it known that I, Abraham Lincoln, of Springfield in the County of Sangamon, in the State of Illinois, have invented a new and improved manner of combining adjustable buoyant air chambers with a steamboat or other vessel for the purpose of enabling their draught of water to be readily lessened to pass over bars, or through shallow water, without discharging their cargoes…”

In other words, the device would lift a boat over shoals or other obstructions without men having to  unload the boat to make it lighter. 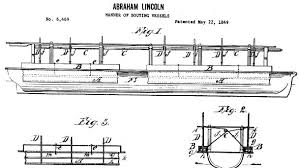 surprised that he qualified for a patent on something technical. Attorneys who traveled the Illinois court circuit with him said that Lincoln was always interested in how things worked.  One attorney wrote that if they were staying overnight at a farmhouse, Lincoln would go out to the barn to see what the farmer had and investigate any equipment that puzzled him.

Lincoln Was In Congress Then

At the time he applied for and received the patent, he was serving as a Congressman representing Illinois. His term began in March 1847 and during the break when he was back in Springfield he began tinkering with an idea for an invention he knew could be very useful.  His knowledge dated to a time when he was a young man.

While still under age 21, Lincoln lived at home. In that day, it was customary that men of that age either worked around the homestead, or if they had jobs, the money earned was sent back to the family.  In Lincoln’s case, he was often hired to help pilot flatboats on the river delivering cargo. He traveled the Sangamon, the Ohio and the Mississippi Rivers over the course of his employment.

One of the challenges any riverboat crew faced was getting stuck in shallow water or caught up on a sandbar, slowing the navigation progress.  Often the cargo would need to be unloaded piece by piece in order to make the boat buoyant enough to make it over the rough patch. This cost time that ate into profits.

But it was later after his first session in Congress that he again encountered the problem.  He was traveling by steamboat when the boat became stuck and the crew was left to cope with getting the steamboat off the sandbar. This gave Lincoln time to ponder a solution that might work.  He arrived home in Springfield with an idea he wanted to develop to solve the problem.

At first, he worked on his own with pen and paper. As he felt closer to a solution, he sought the help and advice of a mechanic he knew in Springfield. Lincoln drew up the plans and helped craft a model of what he envisioned. His idea involved ropes and pulleys that helped inflate bellows on the side of the ship to lift the boat up when the keel hit sand.

According to an article in Popular Mechanics (March 1924), Lincoln

hired patent attorney Z.C. Robbins to represent him in filing for the patent.  The reporter quotes Robbins: “One morning he walked into my office with a model of a western steamboat under his arm. After a friendly greeting, he placed it on my desk and proceeded to explain the principles embodied therein.’”

Recent articles say that Lincoln’s patent was not discovered until 1997, however, the 1924 article in Popular Mechanics shows that Lincoln was known as an inventor long before 1997.  Perhaps this information about Lincoln’s idea was simply forgotten.

As to the invention, the device was never manufactured to fully test its worthiness, but the model of it that Lincoln helped craft is owned by the Smithsonian. It is frequently on display.

While Lincoln continued to be fascinated by how things worked, he was never again able to devote the time to developing another mechanical device.  However, he came away from the experience with a great appreciation for the U.S. patent system where ingenuity is encouraged and rewarded. In his speeches, he frequently extolled the merits of the American laws pertaining to inventions.