Today we think of the ceremonial lighting of the White House Christmas tree as a long-time tradition, but it actually only dates to 1923. Individual first families undoubtedly had Christmas trees, but there was no public or official sharing of the holiday until Calvin Coolidge was in office.  (The story of the start of this tradition is delightfully documented in Seasons Greetings from the White House, a book by Mary Evans Seeley.)

The idea for a public celebration actually came from a woman who was acting director of Community Center of the Public School System in DC.  Lucretia Walker Hardy wrote to the president’s secretary about how nice it would be if a Christmas tree were erected on the White House grounds to share with the American people.

The Coolidge family was already planning a caroling event to which the public was invited, so Hardy’s idea was turned down.  Hardy decided the solution was to go ahead with her program but place the tree on the Ellipse, part of the park just outside the grounds of the White House.

Hardy and the school system made all the arrangements for the 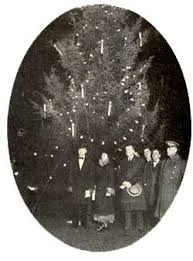 ceremony, including obtaining a tree from Vermont, the president’s home state. She made one last request of the White House: Could President and Mrs. Coolidge attend the lighting ceremony on December 24, so the President could flip the switch to light the tree?

Mrs. Coolidge always spent Christmas Eve day helping distribute gifts to the needy, but just before 5 p.m., President and Mrs. Coolidge came across the street to the Ellipse.  The President stepped on a foot switch at 5:05 p.m. and 3000 twinkling lights came on for a waiting public.

As planned by Hardy, this was followed by holiday songs performed by a choir and the Marine Band. Then the Coolidges returned to the White House for the caroling event they had planned.  Carolers from their church had been invited to begin their caroling outside the White House, and the public was invited to join them.  A local newspaper published the lyrics to the songs that were to be sung, and newspaper readers were invited to clip the pages and bring with them their own personal light so they could sing along.

The event was broadcast on radio, and it was estimated that about a million Americans listened that first year.

The atmosphere in the Coolidge household was decidedly different in 1924. One of their two sons had died the previous July from illness (staphylococcus septicemia). 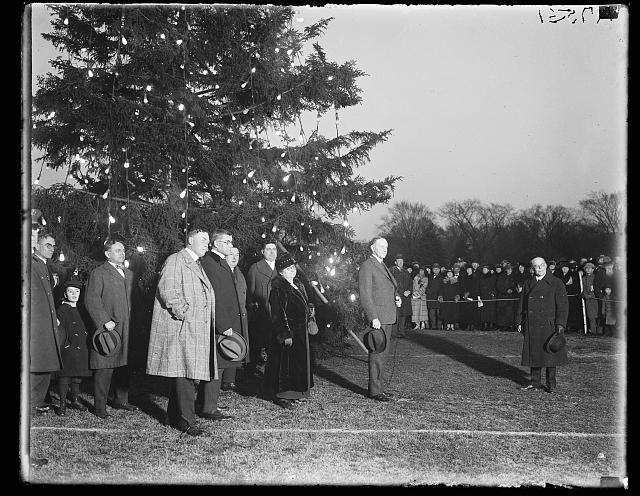 While the Coolidges committed to continuing the holiday schedule expected of them, Calvin Coolidge had given thought to some changes.  He felt it was wrong to cut down a tree each year, so he notified the American Forestry Association that he wanted to discontinue the tree-lighting practice.  This led the AFA executive secretary to present the president with a 40-year-old, 35-foot living Norway spruce to be planted in Sherman Plaza, about a block from the White House and behind the Treasury Building.  The intention was that it could be used each year as the National Community Christmas Tree.  (According to Seeley in Scenes from the White House, the tree only lasted five seasons; the weight of the ornaments and the intense heat of the lights in the 1920s seemed to have led to an early demise.)

So the tradition continued.

In 1926, however, The New York Times (12-25-1926) reported a new development: “Hundreds of automobiles were parked in the White House Ellipse to see the nation begin its celebration of Christmas.  As the lights came on motor horns were blown. Then the crowd stood in silence to hear the Marine Band.”

An estimated 20 million people were thought to hear the program on the radio that year.

For several years Coolidge had been encouraged to use the lighting 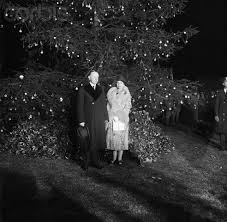 ceremony as a time to address the American public.  In 1927, President Coolidge finally agreed—but he did not want to do it at the ceremony.

In his own hand on White House stationery, he wrote a holiday greeting to the country.  His secretary arranged for it to appear in newspapers across the country on Christmas Day, 1927.

“Christmas is not a time or a season but a state of mind. To cherish peace and good will, to be plenteous in mercy, is to have the real spirit of Christmas—If we think on these things there will be born in us a Savior and over us all will shine a star–sending its gleam of hope to the world.”

The Coolidges Final Christmas in the White House

The following year—1928–President Coolidge had announced he would not be seeking re-election. Press reports were that the Coolidges seemed a little more relaxed and cheerful, knowing that they would soon be returning to private life.

The Coolidges owned many pets, ranging from dogs and ducklings to raccoons while at the White House. To read this story, click here.

And for more delightful stories on the presidents and holidays, refer to Mary Evans Seeley’s book, Seasons Greetings from the White House.