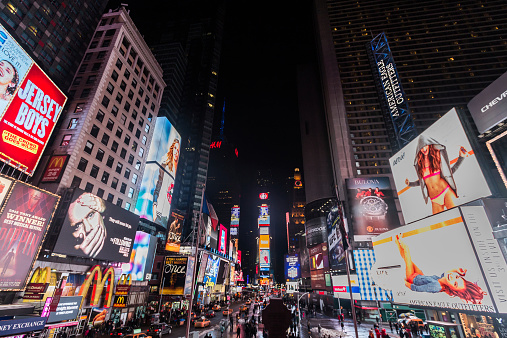 Generally, at one minute before midnight on December 31, people from around the world will welcome the new year when the sparkling New Year’s Eve Ball drops slowly into Times Square. But the pandemic has changed things. In 2021 crowds were asked to stay home, and this year the crowd will be smaller than usual.

Usually an estimated one million people are at the “center of the universe for the countdown”—Times Square. An audience of a billion more people are expecting to be watching via television or live-streaming directly to their phones or other devices.

The ball is covered with 2,688 Waterford Crystal triangles that vary in size and cut in order to enhance the sparkle.  Thirty-two thousand LED (light emitting diodes) provide the lighting in red, blue, green, and white.

The first New Year’s Eve celebration in Times Square occurred in 1904, just after the New York Times had relocated to a new building in what had been known as Longacre Square. Publisher Adolph Ochs had successfully pushed for a renaming of the district, and the triangular area where the new building sat at the intersection of 7th Avenue, Broadway, and 42nd Streets has since then been known as Times Square.

That year Ochs sponsored a party to beat all parties to celebrate the new location. An all-day street festival was capped off with a fireworks display, and there were thought to have been 200,000 people in attendance. The Times continued to sponsor a New Year’s Eve event in the area, and New Yorkers soon began going to Times Square instead of ringing in the new year at Trinity Church as had been the previous custom.

A few years later the city banned the use of fireworks, and that led to the creation of a new tradition. At first, Ochs’ team developed a creative use of lights. At the end of 1905, lights were configured to read “1906” and these electric lights flashed from the tower of the Times building, reportedly visible from miles away. The Times tower was also festooned with electric streamers that lighted the building’s four corners.

But the creative thinkers were still at work.

Everywhere in the world, the problem of synchronizing time was addressed with many forms of creativity. In 1833 The Royal 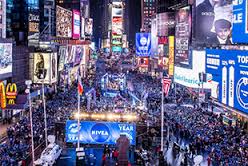 Observatory in Greenwich England had a ball installed, and at 1 p.m. each day, the ball would drop to mark the time and allow the captains of nearby ships to set their chronometers. (When the telegraph was invented, the exact time could be communicated beyond areas that could see the ball drop.) The success of the dropping ball was copied elsewhere in the world, and it is this tradition that is mimicked with the dropping of the ball in Times Square.

The first ball made for Times Square was iron and wood and weighed 700 pounds; it featured light from one hundred 25-watt light bulbs. It was made by an immigrant metalworker whose company, Artkraft Strauss, took responsibility for the creation and dropping of the ball for most of the 20th century.

While the ball must have been on order for many months before December 31, 1907, its introduction was met with little joy and less fanfare. The “Bankers Crisis” had occurred in October of 1907, causing a 50 percent drop in stocks in the New York Stock Exchange and leading to the spread of a nationwide recession. There was no central bank to avert the disaster; times were very hard for people and there was little feeling of optimism. (The following year, Congress undertook a study of the country’s financial structure that led to the creation of the Federal Reserve Bank.)

As a result, that fist drop of the Times Square ball was met by a subdued crowd. The New York Times reports: “The dropping of the illuminated ball on the tower of The Times was awaited by an expectant crowd with upturned faces. The square was thronged. As the ball dropped on the stroke of twelve an involuntary cheer arose from many thousands.” (NYT 1-2-1908)

During World War II, the United States was adhering to a wartime “dimout” and in 1942 and 1943, there was no ball drop. The tradition was so strong, however, that people still gathered in Times Square. At midnight during those war years, a minute of silence was observed followed by the ringing of chimes from sound trucks parked in Times Square. 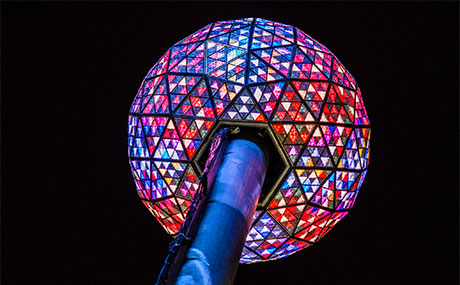 Since that time there have been several new versions of the ball, but one thing remains the same: People enjoy gathering in Times Square — or watching via television or the Internet — to mark the beginning of a new year.

To read about why we sing Auld Lang Syne on New Year’s Eve, click here.

Happy new year to you all.