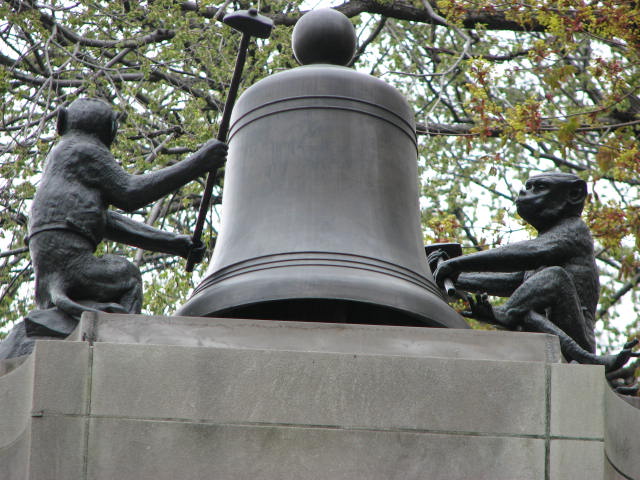 The Delacorte Clock in Central Park has been delighting families with its carousel of animals dancing to musical chimes since it was first created in 1965.

The musical clock built above the arcade between the main part of the Central Park Zoo and the Children’s Zoo, was the idea of George T. Delacorte, Jr. (1894-1991), who built a successful publishing company that started out as Delacorte Press and eventually became Dell Publishing. As Delacorte’s wealth increased, he found it increasingly unsatisfying to write checks to various good causes; he wanted to contribute beautiful things–monuments, statues, and fountains–to New York City, the place he had always called home.

As part of his gifts to the city, he set aside funds for their upkeep, guaranteeing their maintenance for 25 years following the installation of each monument or fountain. During his lifetime, Delacorte maintained a staff of three who traveled the city to look after those monuments.

The clock at the zoo was inspired by his many trips to Europe where he admired the bell towers and chimes that are featured in so many European cities. 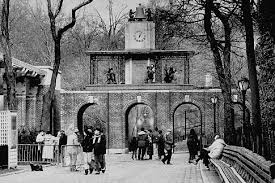 bridge that spanned between what was then the Monkey House and the main Central Park Zoo quadrangle. This would elevate the clock but keep the animal carousel at a level where children could still see the figures as they circled happily to the “glockenspiel-style” nursery music.

Delacorte traveled to Europe to select the right sculptor for the whimsical animals he envisioned.  Ultimately, Delacorte selected Andrea Spadini (1912-1983) to create the brass sculptures.  There are six animals that live just below the clock, spinning their dances on both the hour and the half hour. The animals include a bear with a tambourine, a mother kangaroo playing a horn with her baby peeking out of her pocket blowing his own smaller horn, an elephant with an accordion, a goat blowing on Pan-stype pipes, a hippopotamus with a violin, and a penguin with drums.

Just above the clock there is a single brass bell. Two monkeys with hammers face the bell.  The clock’s action begins when the monkeys strike the bell with their hammers to count off the appropriate hour. Following the last chime of the hour, the dance of the animals begins. (At the half hour the bell is struck just once and a shorter dance ensues.) 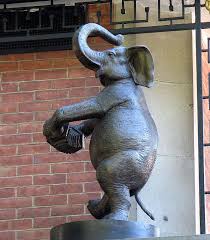 The clock chimes every day between 8 a.m. and 6 p.m. The music is now programmed digitally but still plays a selection of one of 32 nursery rhymes, including Hickory Dickory Dock, Row, Row, Row Your Boat, and Twinkle Twinkle Little Star. At holiday time, Christmas music is played.

The Delacorte Clock: The Unveiling

The clock was revealed to the public in a special ceremony in late June of 1965. The event included some of Delacorte’s grandchildren who helped tug on the ropes that released the fabric covering the clock itself. The first song played was “The Parade of the Wooden Soldiers.” The event was presided over by Parks Commissioner Newbold Morris who pronounced that it was Delacorte Day in Central Park. Former Parks Commissioner Robert Moses was also in attendance.

By 1980 the zoo had hit upon hard times, and the solution that was 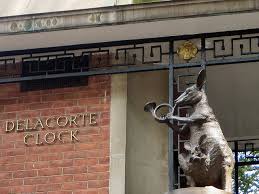 devised involved the Bronx Zoo assuming control. (The Bronx Zoo changed its name to the Wildlife Conservation Society in 1993.)  Starting in 1983, major construction was undertaken for improvements to the zoo itself. By 1995, the organization was ready to look at the clock.  Using funds set aside by the Delacorte family, a major restoration took place, and the clock continues to be a major attraction for families and people of all ages.

George Delacorte entered the publishing industry in 1921 with a mission. At the time, most magazines were literary publications marketed to the elite.  Delacorte felt that there was room for

magazines that had mass appeal. Under the Delacorte Press imprint, he began publishing “true confession” magazines as well as romance books (called “smoochies”) and joke books.  By 1929, he also began publishing comics under the Dell Comics imprint. One of Delacorte’s most successful innovations was the ever-popular puzzle magazine, also printed by Dell.

In 1942 Dell entered the paperback market following the lead of Pocket Books.  Because of the looming war, there was a paper shortage so Dell combined with Western Publishing.  Western had paper and Dell had content. The partnership was a great success, and they pioneered several different types of paperback books until settling in with a single format.

George Delacorte went on to build the company into one of the powerhouses in the publishing industry.  In 1976 Dell was sold to Doubleday for $35 million.  Dell Magazines was sold in 1997 and still exists as a major publisher of puzzle and horoscope magazines as well as publishing mysteries and science fiction.

In addition to donating funds for the clock, Delacorte funded the Alice in Wonderland statue in Central Park (1959) in memory of his first wife, and the Delacorte Theater was built in 1962.

In 1964 he formed Make New York Beautiful, Inc., a nonprofit

organization of wealthy people dedicated to making permanent improvements to the City of New York for its cultural advancement and beautification.

George Delacorte also arranged to have built several fountains in the city—ones at City Hall and Columbus Circle and on Roosevelt Island are among them).

According to The New York Times (3-21-1985), Delacorte had a daily ritual throughout his working years: He walked from his office through the park, arriving at the clock for the 4:30 show. “The children go wild,” he is quoted as saying.

After he retired in 1976, he still maintained an office in midtown and made visits to his monuments part of most days when he and his second wife, Valerie, were in town.