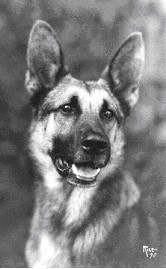 Strongheart was the first dog “movie star” to appear in dramatic roles. The handsome German shepherd was fast and strong; smart and capable and always managed to save the day, thereby setting the stage for Rin Tin Tin and all those that followed.

The dogs that had preceded Strongheart in Hollywood were ones like Luke who appeared in comedies with Fatty Arbuckle and Buster Keaton in comedies.  Jean, the Vitagraph dog, was an exception. She appeared in both comedies and dramas but her role was always that of canine companion. (Jean, too, had been trained by Laurence Trimble who trained Strongheart.)

Strongheart was born in Germany in 1917.  His original name was Etzel von Oeringen, and he was descended from a carefully-bred line of police dogs. The dog who would one day be Strongheart was a star pupil in the police/military work for which he was trained, and he embodied strength, courage, and discipline.

American director Laurence Trimble, who achieved fame as an animal trainer for his work with the Vitagraph dog, Jean, was in search of a new dog. Jean had died in 1916.

Following World War I, Trimble and his wife, screenwriter Jane Murfin, traveled Europe looking for the right dog. They must have pinpointed Etzel/Strongheart as the well-respected Bruno Hoffman, an American breeder of German police dogs, was soon clearing the way to bring Etzel to the United States.

The dog arrived at Hoffman’s kennel in White Plains, New York in 1920. Shortly after his arrival, Trimble and Murfin came to see him.  When they pulled up to the property, the couple ignored the bell on the gate that could have been used to summon Hoffman.

Instead they simply opened the gate and advanced into the yard about 15 feet. “…there was a crash of glass and an ominous growl and Strongheart came bounding through the window in full charge at both of us,” wrote Trimble in an article for the New York Times, 5-18-1924.

Murfin was terrified and ran toward the gate. As an animal trainer, Trimble knew that standing still was their best course of action. He told Murfin to stop, and he said to the dog, “Halt!”

This caused Etzel/Strongheart to pause, and they all stood 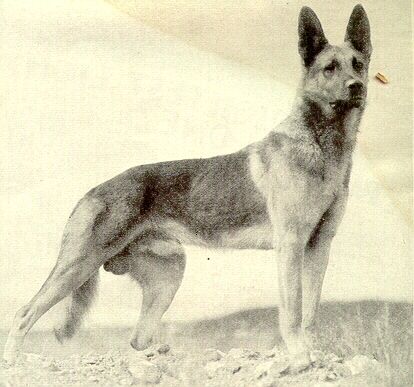 motionless for a few moments. Then Trimble called the dog’s name. “He responded by walking around behind me and coming to a halt with his head at my right hand and facing in my direction.” This is the exact position a dog should assume when working with his trainer.

Fortunately Hoffman appeared moments later so all tension dropped.  After a few formalities, Etzel/Strongheart went home with Trimble and Murfin to begin preparing for his career in the movies.

Trimble soon saw that though Strongheart was perfectly trained, he had no idea how to be “just be a dog.” He probably had had no time for puppy play as he grew up. While the dog responded excellently to all the commands, Trimble knew that Strongheart had to be “detrained.” (The police training would come in handy in the adventure scenes.)

Strongheart needed to be socialized so that he could be comfortable around groups of people. He also needed to learn to play so that there could a fun-loving side to the dog on screen.

Trimble knew the first step was building a strong bond. He kept Etzel/Strongheart by his side nonstop for many months to build trust between them.

In the 1924 New York Times article, Trimble described teaching Strongheart to play. Trimble dressed himself in heavy clothing, fully covering his hands and head.  He would then go down on all fours to push against Strongheart to let him react to unexpected movements

that weren’t threatening.  When Trimble “played” this way with Strongheart, he would issue the command, “Play.”   It was a slow process but Trimble reported that over time, Strongheart began to act like a puppy—“an ungainly puppy.”

After a few weeks of this training, Trimble introduced a kitten for Strongheart to play with. Trimble knew cats are well-prepared to react if things get out of hand. Indeed, Strongheart did not like it when he eventually got a swipe on the nose from the cat. As the kitten realized that Strongheart posed no threat, she became comfortable playing with her new sparring mate.

The next “playmates” were rabbits. Trimble and Murfin had taken Strongheart to the country.  When the adults flushed out a rabbit from the undergrowth, Trimble would command “Play” for Strongheart and the chase would begin. No rabbit ever stopped to play but no rabbit ever got eaten either though Strongheart could easily catch up with them. Later on, Trimble introduced balls to teach Strongheart to swat and to fetch.

Since Strongheart was to play a dog hero, some of the police dog lessons he had learned had to be modified. Perhaps most impressive was that Trimble was able to create a way for the former attack dog to attack gently.  Strongheart could tear a villain’s clothes to shreds but he never left a mark on any actor.

Observe this 1:44 minute fight scene from The Return of Boston Blackie (1927), and you’ll see how very vicious Strongheart appears but how the actor is still just fine:

Officially rechristened Strongheart, the dog’s first film was “The Silent Call” (1921). Just as Trimble hoped, the film made Strongheart a beloved star. Two events resulted from stardom. The first was a “lady love.” The story goes that Strongheart was allowed to pick his own leading lady, but common sense would say this wasn’t exactly how his partner was selected.  Certainly he was soon joined in films and personal appearances by a beautiful, light-colored German shepherd named Lady Jule.

Strongheart and Jule were soon traveling by train to make personal appearances where he was greeted by adoring fans. They were so popular that fan magazines and the newspapers couldn’t get enough of the handsome couple.

The PR people for the film, however, did a little artful spinning of Strongheart’s background. He was described as a German police dog “who did war duty as part of the Red Cross.”  By making Strongheart’s participation in World War I seem heroic, the public relations people removed the chance of any anti-German sentiment.

A Visit to New York 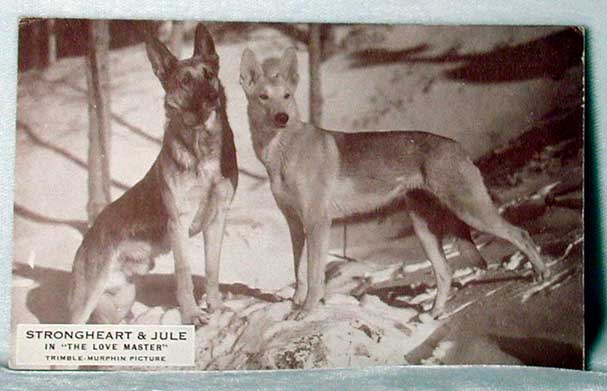 One of his “press junkets” involved Lady Jule and himself appearing at the Westminster Kennel Club show. The pair was placed in a booth near the entrance to the main ring, and there was a constant line of people waiting to see the Hollywood dog stars.

While in New York, the dogs stayed in a three-room suite at the Hotel McAlpin. They had traveled to New York in private compartment on the  Twentieth Century Limited, the most exclusive train in use at that time..

While there, Strongheart made a personal call to The New York Times in order to promote his new movie, The Love Master.  The Times evidently had a cat in residence but Strongheart was able to resist temptation and left the building without incident.

Strongheart’s death came as a result of an on-set accident. He either slipped or brushed against a hot light which resulted in a bad burn. The burn did not heal and a tumor resulted.  Strongheart died in June of 1929.

Strongheart was survived by Lady Jule and many offspring.  Lightning was perhaps the most famous of his children, but a grandson, Silver King, appeared in a couple of films. The dog also was sought after for personal appearances to teach children about safety.

4 thoughts on “Strongheart: An Action-Adventure Star”