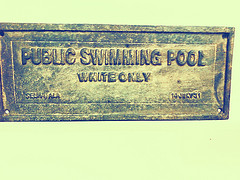 Last week I wrote about baseball catcher Roy Campanella. Reading his autobiography sent me in search of who, what, when, where, and why about the end of discrimination in professional baseball.

This week I went in search of a similar answer. My July e-letter is about summer pleasures, and I started wondering what brought an end to segregation of public swimming pools. I had a vague memory of a recent book on the topic and found and ordered Contested Waters by Jeff Wiltse (University of North Carolina Press, 2007). I didn’t have to read far to come upon a telling story:
In Youngstown, Ohio in 1951 the winning Little League team decided that a fitting way to celebrate the victory was a trip to the local swimming pool. When coaches and the players and their families arrived at the pool, one player was not permitted to enter. The child, Al Bright, was asked to sit on the lawn outside the pool area. Several parents took issue with the lifeguards who were enforcing the pool’s no-negro policy.

The guards finally agreed to a concession. Everyone else got out of the pool. Little Al was put in a rubber raft and a lifeguard pushed him around the pool on the raft. Wiltse writes that Al was specifically told not to touch the water.

Public Swimming Pools Originally Built for Bathing
Starting in the mid-19th century, public pools were built to be public baths for poor people who had no other options for getting clean. The pool visits were segregated by gender; certain days for men and certain days for women. There was no racial segregation at that time since the pools were built in areas where they would be used by the lower classes.

Just as African-Americans had their own over-crowded schools in one part of town, if they had access to a pool, it was a separate one from those frequented by whites. White men felt strongly that black men should not be able to be in such “intimate” surroundings with white women so Jim Crow laws dominated pool life. In Baltimore at one point, there were eight public pools; seven for the use of white residents, one for the use of non-whites.

After World War II, the sentiment of northern white residents began to soften. Attitudes of African-Americans who had served in the military or taken on important jobs on the home front changed, too, and they felt encouraged to advocate for their rights. When it came to the right to use public pools, the efforts ranged from a few friends going to a pool and asking to be let in to an organized civil demonstration backed by the NAACP.

When Brown vs. Board of Education (1954) led the way to desegregation of schools, many city attorneys in the South continued to claim that pools could still not be integrated because the pool environment “was more sensitive” than a school environment. The contact among the races was more intimate, and women could be seen wearing very little clothing.

An article from 1961 in The New York Times shows that discrimination lingered at pools and recreational facilities for a long time. A Federal judge ruled that Birmingham’s segregation of its public recreational facilities was unconstitutional (10-29-61). Immediately after the ruling was handed down, city responded that they would appeal, and they planned to close the parks immediately in order to avoid integration.

As public pools in more and more cities were required to integrate, white families upset by the rulings either joined private clubs or moved to the suburbs and added pools to their yards.

While the Civil Rights movement finally led the way toward more and better access for people of all colors in public parks, on tennis courts, and at public swimming pools, membership in private clubs grew. (Of course, many of the clubs not only segregated by race but also by religion.) Today we still stratify along economic lines.

Can’t we all just learn to work and play together? (That goes for you, too, Congress.)

If you’d like to read about what brought down the color barrier in baseball, read last week’s post “Baseball and Politics” http://www.huffingtonpost.com/kate-kelly/baseball-and-politics-a-r_b_637732.html.

And if you’re interested in what it was like for Jackie Robinson to fly to spring training in the late 1940s, visit my website: “Airlines Passengers Needed Their Own Rosa Parks” http://americacomesalive.com/2009/11/17/airline-passengers-needed-their-own-rosa-parks/ .

And on a happier note, my summer e-letter is actually about summer pleasures. Did you know that miniature golf actually has a really interesting history? And remember drive-in movies? (For a free copy send me your e-mail address with “summer” in the subject line.)

And New Yorkers should check out the Saturdays-only public pools that will be in place along Park Avenue in August. May they be a huge success in every way: http://www.nytimes.com/2010/07/16/nyregion/16pool.html?_r=1&ref=nyregion