As the Pledge of Allegiance became more widely accepted after its

introduction in 1892, various groups weighed in on the wording.  There have been alterations from the original wording penned by Francis Bellamy (1855-1931):

“I pledge allegiance to my Flag and to the Republic for which it stands, one nation, indivisible, with liberty and justice for all.”

One change was spearheaded by the American Legion and the Daughters of the American Revolution. In 1923 the groups pushed for “my flag” to be replaced by “the Flag of the United States of America.” The organizations felt that with so many immigrants coming to the country that it was important for newcomers to affirm their loyalty to the U.S.

In 1954 Congress added the words “under God,” to the pledge. This

campaign was led by the Knights of Columbus, the world’s largest Catholic fraternal organization.

The addition of “under God” has led to numerous court challenges from people who cite the Constitution’s First Amendment specifying that Congress shall not make any laws pertaining to establishment of religion. Many believe that a pledge of patriotism should not be tied to a belief in God.  Thus far the legal challenges have been unsuccessful.

Changes in the Way We Recognize the Flag (the Salute) 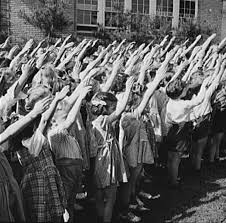 Today when we say the Pledge of Allegiance, we have learned to place our right hand over our heart as we recite the words. The original salute was very different. It was called a military salute, and it consisted of the right arm extended upward, with the palm down slightly. This was the form schoolchildren and members of the public were taught to use when they said the Pledge from 1892 on.

Today, of course, that is the arm gesture that we associate with “Heil Hitler.”  It began being used officially in Nazi Germany in 1933 when the Nazis passed a law that stated that all employees of the state were to be saluted in that way and violators would be punished.

This stirred a big reaction among Americans though it took almost

ten years to pass a new law.  In December of 1942 Congress passed an amendment that specified that the pledge “should be rendered by standing at attention facing the flag with the right hand over the heart.”

Is the Pledge of Allegiance Still Widely Used?

Today most states provide time for schools to say the pledge, though it is still at the discretion of the local school board and/or the individual teacher. Five states do not have this provision (Hawaii, Iowa, Oklahoma, Vermont, and Wyoming).