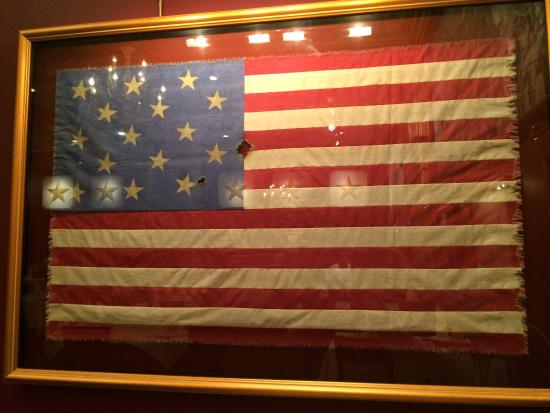 Francis Scott Key (1779-1843) was a 35-year-old attorney, who was not in the military during the War of 1812, yet he found himself being held behind enemy lines September 13-14 of 1814. He watched as the British battled to take Fort McHenry, the fort that sits at the mouth of Baltimore Harbor. The flag that flew above Fort McHenry was made by Mary Pickersgill and is the one we now know as the Star Spangled Banner.

The British had captured Washington D.C. on August 24, 1814, and by early September they were plotting a siege of Baltimore, planning to attack Fort McHenry.

So how did Key become caught up in the war?

The Incident that Led to Key’s Involvement

The story of Key’s involvement begins with the British and their march through Upper Marlborough, Maryland in mid-August on their approach to D.C.

Upper Marlborough was nearly deserted since many American men had gone off to fight. However, an older physician, Dr. William Beanes (1749-1828), was still in town and gave his home to the British commander, General Robert Ross, to serve as the British headquarters. He also tended to any of the sick or wounded, including British soldiers.

After Washington, D.C. was taken, the British returned through Upper Marlborough, plundering local farms along the way. The few landowners who were still there plotted revenge, and one of them encouraged Dr. Beanes and another fellow to help capture and imprison a few of the British stragglers.

Word of the capture got back to General Ross who ordered that the Americans responsible be seized. He soon released the other two gentlemen but felt personally betrayed by Beanes who had seemed to be a British sympathizer. Beanes was taken back to General Ross’ ship, and rumor had it that he was to be hanged.

Francis Scott Key, a 35-year-old Georgetown lawyer, was summoned by U.S. officials to help negotiate with Britain for the release of the elderly Beanes. Key was accompanied by Colonel John Skinner, an American agent for prisoner exchange, and they sailed on a sloop flying a flag of truce. On September 3, Key and Skinner boarded the British ship where Dr. William Beanes was being held and conducted a difficult but successful negotiation. To make a case for Beanes, Key and Skinner were carrying letters from some of the British soldiers whom Beanes had helped after the battle for Washington.

The British confirmed that Beanes would be released, but they worried that the Americans had picked up some information about the British plans for taking Baltimore. As a result, the British released the men to the American vessel but kept them under guard throughout the attack on Fort McHenry.

The attack began at 7 a.m. on September 13, and for 25 hours the British bombarded the fort. A good number of the bombshells exploded too early, leaving red flares across the sky.
Throughout the battle, Key, Beanes, and Skinner watched from the deck of their ship until darkness made it too difficult to follow the action. Overnight, the shelling slowed; the Americans were afraid that Fort McHenry had been taken.

The next morning, Francis Scott Key, Dr. Beanes, and Colonel Skinner awoke to see that the American flag still waved above the fort. This was the moment that inspired Key. He began to write a poem on the back of a letter he had in his pocket.

The next day when Key’s brother-in-law, Judge J.H. Nicholson, read the poem, he liked it so much he had it printed. Calling it, the “Defence of Fort M’Henry” Nicholson arranged for it to be handed out all over Baltimore. Nicholson also suggested the words be set to music using the tune of “To Anacreon in Heaven,” a song which was popular in America at the time and happened to be a British drinking song.

In October 1814, a Baltimore actor sang the song at a local tavern, calling the song the “Star-Spangled Banner.” It was an immediate success.

The Star Spangled Banner was adopted by Congress as our national anthem in March of 1931.

Today Francis Scott King is buried in Mount Olivet Cemetery in Frederick, Maryland, which was his hometown. There is a statue at the cemetery and plaques throughout town that explain Key’s life in Frederick.

If you would like to read what happened to the flag itself after the War of 1812, read Fun Facts about the U.S. Flag.

And here’s the story of Mary Pickersgill, the woman who made the flag.

She was assisted by a young black girl named Grace Wisher.

4 thoughts on “Francis Scott Key: How The Star Spangled Banner Came to be Written”