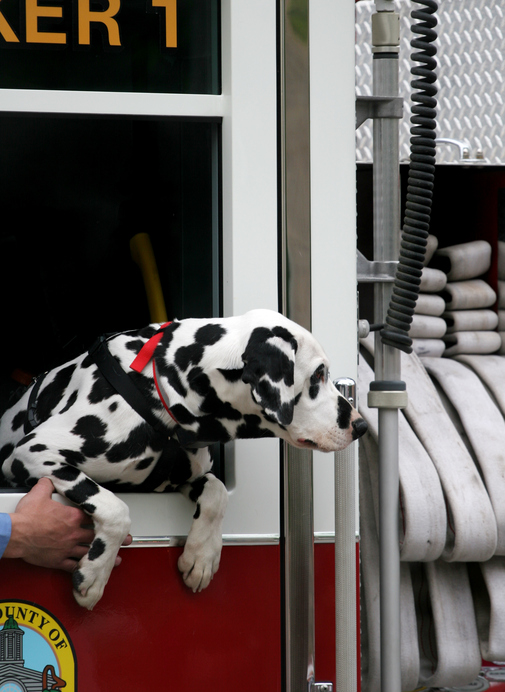 The Dalmatian is a strong, active dog capable of great endurance and considerable speed. Today they remain a symbol of the firehouse, but they are perhaps better known as the breed featured in Disney’s film, 101 Dalmatians.

These handsome, short-haired dogs have always been working dogs.  Their original job was serving as sentinels along the eastern coast of the Adriatic Sea, protecting the borders of Dalmatia and Croatia. They have also been shepherds and hunting dogs. Their strength has permitted them to be used pulling wagons or carts.

European aristocrats found they made great coach dogs. Some wealthy gentleman probably adopted a regal black-and-white dog to accompany him, and soon others had to have these great-looking dogs.

As a breed, the Dalmatian soon demonstrated an affinity for being with horses.  They were happy running alongside them and had no trouble keeping up. Horse and dog seemed well-suited to each other. The movements of the dogs were smooth enough that they didn’t spook the horses. The dogs were happy to bed down in the horse stalls at night.

Coach drivers came to appreciate the dogs for their protective qualities.  If a coach driver wanted a good night’s sleep without worrying about theft of his horses, he could leave a Dalmatian on guard in the stable.

In America, the first organized firefighting companies started with all-volunteer groups as early 1678.  While many fires still had to be fought with bucket brigades, men began to devise hand pumps for powering the water spray. 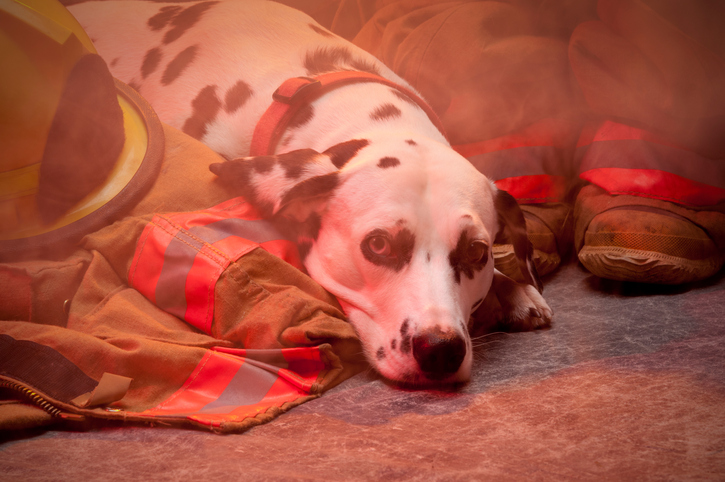 As pumps became bigger and better, the companies used wagons to transport the pumpers.  Early on, few companies could afford horses so the men pulled the wagons themselves. As some city companies began to gain more funding, they bought horses to pull the fire apparatus.  With this development, the dogs became useful.

At the sound of the alarm, a good Dalmatian would rouse the horses and then emerge from the firehouse, barking to clear the way.  Once en route, the Dalmatian encouraged a fast pace by running alongside the team of horses. 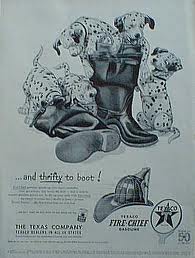 When the wagon arrived at the fire, the fire fighters unfastened the horses and moved them away from the fire so that no stray sparks could land on the animals.  During winter firefighting, the horses were usually covered with blankets for warmth and fire protection. In summer, blankets were still thrown over them to protect them from stray sparks. At that point, the Dalmatian assumed a new role: keeping the horses calm and keeping them together until it was time to go back to the firehouse.

Breed experts object to a rumor that people sometimes repeat–that Dalmatians are deaf and therefore the siren doesn’t bother them. While the breed has a slightly higher incidence of deafness than other breeds, that is not what made them well-qualified for working at a firehouse.

Today a few firehouses still keep a Dalmatian as a mascot. Many more have firefighters who will bring their own dogs in for use in parades.

For more information about firefighting, read about NYC’s Firehouse Museum.

Also see “A Dalmatian in the Civil War.”

“Why are Dalmatians the Official Firehouse Dog?” by Remy Malina, www.livescience.com

“History/Origin of the Dalmatian,” www.ccdalmatians.com

“The history of Dalmatians,” www.westeringsholidays.co.uk

“A Short History of the Dalmatian,” The Dalmatian Club of America, article excerpted from The Complete Dog Book, AKC, 1992.

1 thought on “How Dalmatians Became Known As Firehouse Dogs”