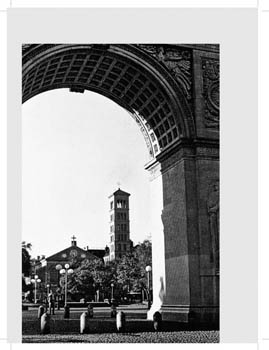 Tourists may flock to whatever city any of us calls home, but generally we, the residents, are the last to visit the attractions in our own communities.

To rectify this, three of us in a group of ten set out as part of a walking tour of Greenwich Village on Saturday. This particular tour promises a look at the West Village with a focus on the artists and writers who lived there, but the subjects discussed by our guide also included architecture and civil defense signs as well as likely real estate prices of homes in the area. The tour is commercially-sponsored and is held several days a week; we can testify that in our case, it was “rain or shine.”

The guide kept up a lively patter of dates and stories about the area, and in two hours, we learned information we never would have known otherwise, stimulating me to come home and learn more.

Washington Square
The tour began at Washington Square. Those who remember their American history may recall that George Washington took the initial oath of office to become president at Federal Hall in New York City in 1789. But even if one remembers that, it is logical to wonder why Washington is commemorated with both a park and an Arch in what is now Greenwich Village.

By tracing back to what the area was before, I learned when Washington’s name first became connected with the land. In 1826 the city bought the land — formerly a burial ground — and leveled it to create what was called Washington Military Parade Ground. (Parade grounds were created in many communities as a place where volunteer militia companies could drill.)

In 1871 the land came under the control of a newly formed Parks Department, and at that time it was redesigned to take on a more park-like feel. Eventually it came to be called Washington Square.

Washington Arch — Built Twice
The original arch was built of wood and papier mâché in 1889 as a temporary commemoration of the centennial of George Washington’s inauguration as president. Modeled after the Arc de Triomphe in Paris, the Arch was designed by Stanford White (1853-1906), and was located about 100 feet north of the Square, spanning Fifth Avenue. It was so well-received that a fundraising campaign to build a permanent arch out of Tuckahoe marble was begun. Construction of the permanent arch began in 1890, and the new Arch was dedicated in May of 1895. The builder was David H. King, Jr., who constructed the pedestal of the Statue of Liberty.

Our guide, Dennis, also informed us there is an interior staircase, consisting of 102 winding steps that lead to a room at the top of the Arch. I later learned that at one point a parks department office was located there but today the room is used only for storage of necessary items like spare light bulbs.

The two statues that now grace the Arch were added after the completion of the permanent Arch. The eastern statue depicts George Washington as Commander-in-Chief, accompanied by Fame and Valor. It was designed by Herman Atkins MacNeil (1866-1947) and installed in 1916. The statue on the west shows Washington as Statesman accompanied by Wisdom and Justice, designed by Alexander Stirling Calder (1870-1945) and installed in 1918. Unfortunately, pollution has been hard on these statues.

Cars were routed on a road through the Arch until 1971 when a group that included community activist Jane Jacobs finally won the fight to close the park to traffic.

More from the Tour
While Washington Square was a focal point of the tour, the true beauty of the experience was taking the time to walk slowly through the streets of the West Village to notice the small details most of us never take time to note on a regular day.

Along the route, we walked past a row of houses built at the north side of the square that date to 1829-1833. The houses, built of red brick and Greek revival in style, became known as ‘The Row.” The original stables just behind The Row are now beautiful homes that face quiet mews.

We walked past the exterior of the building that was depicted as the building where the show “Friends” was to have taken place.

On tiny Weehawken Street, just a block long, our guide pointed out a wood frame house with peaked roof and exterior stair case that was built in 1849. Shortly after it was built, fire laws prohibited building wood frame construction in lower Manhattan, so its existence is all the more remarkable.

On Grove Street we peeked through a gate to Grove Court to see housing that was built in the 1840s for laborers and trades people. Though very desirable today, the housing was not considered so at the time–it turns out that people of wealth would not have lived in houses that did not front on a street.

The guide pointed out that the West Side highway is built on landfill and that an alley way where we stood that now leads to the highway was a pathway that sailors would have taken from the docks when on shore leave.

Artists Writers and Musicians
We walked by homes of Henry James, Edith Wharton, and Edna St. Vincent Millay and would have seen Edgar Allan Poe’s home if the rain had not become a downpour, but the most colorful stories concerned musicians. The Hotel Earle, now the Washington Square Hotel, was a temporary home to Joan Baez and Bob Dylan. Other musicians who found inspiration at the Earle included John Phillips of the Mamas and Papas. In an interview published several years ago, he recalled that he wrote “California Dreamin'” there. Michele woke to see the snow in Washington Square and they stepped out for a walk; the church where they stopped to get warm was the Judson Memorial Church (also designed by Stanford White) just south of the Square.

Despite sprinkles that became a relatively hard rain by tour’s end, the tour guide and group gamely kept up a good pace and we saw a side of New York City and Greenwich Village that we rarely take the time to notice.

Even if those of us on the tour were to forget all the facts that Dennis shared with us, we would remember the sense of scale of the buildings in the area; we would remember the importance of looking up now and then to observe the architecture; and we would recall that the West Village that we may most strongly associate with the bohemian lifestyle of the early part of this century, actually had a very long and colorful history that predated this.

For an absolutely delightful collection of photographs of the Arch during different eras, please visit: NewYorkArchitecture

2 thoughts on “Being a Visitor in Your Own Town: Greenwich Village through Fresh Eyes”