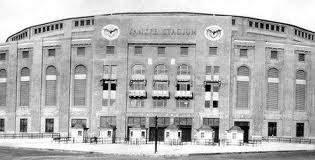 Just as they do today, New Yorkers of the past had several places where they could go to watch baseball. The first field used, starting in about 1880, was just north of Central Park and was intended for polo, so it was known as the Polo Grounds; later on, action was moved to a field farther north, but it continued to be referred to as the Polo Grounds.

In 1903 Hilltop Park (near 168th Street and Fort Washington Avenue) was built, and ten years later, far to the south, Ebbets Field became home to the Brooklyn Dodgers.

The team we now know as the New York Yankees started as the New York Highlanders playing at Hilltop. In 1913 they changed their name to the New York Yankees and began playing at the Polo Grounds (by then at 157th and 8th Avenue).  But co-owners Colonel Jacob Ruppert and Colonel T.L. Huston felt the team needed their own stadium, so they bought land in the Bronx just across the Harlem River from the Polo Grounds and built Yankee Stadium.

Construction of the stadium began on May 5, 1922 and was completed in just 284 days.  It was designed by Osborn Engineering, and was built of steel and concrete. Unfortunate fires at various sports venues with wooden stands had taught builders an important lesson.

When the stadium opened on April 18, 1923, the place must have hummed with excitement;  Officially, 74,200 fans packed Yankee Stadium for their first glimpse of baseball’s grandest facility.  John Phillip Sousa and the Seventh Regiment Band led the teams on to the centerfield flagpole where the American flag and the Yankees’ 1922 pennant were raised.

That game featured baseball star Babe Ruth (1895-1948) christening his new home with a three-run homer.  Because it was widely recognized that Ruth’s tremendous drawing power made the new stadium possible, it quickly become known as “The House That Ruth Built.”

In July of 1930 Yankee Stadium made news by hosting a double header played by two Negro Leageue teams, the New York Lincoln Giants and the Baltimore Black Sox.  Yankees owner Jacob Ruppert had donated the use of the stadium for a benefit for the Brotherhood of Sleeping Car Porters, the nation’s first successful black union. After this first benefit game broke the barrier, a precedent was set–if the Yankees were out of town, Ruppert rented the stadium out to Negro League teams thus maximizing income and stadium usage.

Since the Yankees achieved great success at attracting fans, work was soon underway to expand the stadium, and soon the capacity grew to nearly 80,000, depending on the number of people who stood while watching games.

Over the course of its history, it became one of the most famous venues in the U.S. and its capacity for crowds made it a logical place to host a variety of sporting events as well as important guests ranging from rock stars to the pope. 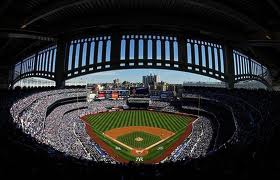 The original Yankee Stadium became known for several features. One was a purely decorative element; a 15-foot deep, gently curving copper façade adorned the top of much of the stadium’s third deck and was reminiscent of features from the Roman Coliseum. It gave Yankee Stadium a unique “sense of place,” and the frieze, with its cut out arches, cast memorable shadows on the field during late afternoon games.  Yankee fans love to tell the story from 1963 of how Mickey Mantle hit a home run to right field that nearly hit the top of the frieze.

Another memorable area of the stadium evolved over time. The area started out as a display space for monuments and plaques dedicated to distinguished Yankees with the first monument displayed in 1932. Many more were added over time, and it became known as Monument Park.

Except for the addition of lights in 1946, the look of Yankee Stadium remained relatively the same until the winter of 1966-67 when its new owner, CBS, gave the stadium a badly needed facelift. But twenty years later, the facelift was not enough and talks began about building a new stadium at a different location, including Manhattan’s west side and New Jersey.

Stadium moves are very upsetting to fans, and by 2006, Mayor Michael Bloomberg stepped in to work out a location for the Yankees in the Bronx a block north of the original stadium.  Construction began in 2006 and the $2.3 billion dollar stadium opened in 2009.  While effort was made to include iconic features from the original stadium such as the frieze and Monument Park and the new stadium has much to recommend it, the new Yankee Stadium has been criticized for the extraordinarily high prices for some of the seats.

Last Game in the Old Stadium

On September 21, 2008, the old Yankee Stadium opened seven hours early to allow fans to stroll the warning track (the strip on the field right before the fence) for a last time. Later in the day, the American League pennant flag that was raised on the very first opening day in 1923 was raised. 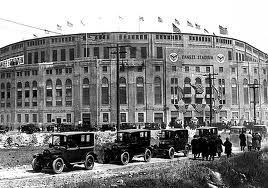 talked about certain aspects of the stadium.  Derek Jeter said he would miss the walk from the clubhouse to the dugout –down a tunnel where there hung a sign with a quote from Joe Dimaggio: “I want to thank the good Lord for making me a Yankee.”  Jeter always tapped the sign as he passed through the tunnel on the way to the field for each game.

Jeter noted at the groundbreaking in 2006 that the ghosts of the original stadium would accompany the team to the new stadium, but perhaps Yogi Berra said it best: “I won’t miss this place because it’s inside me.”

The original facility was not demolished until 2010, nearly two years after it closed. It is being converted into parkland and will be known as Heritage Field.