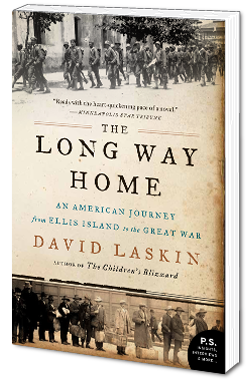 Looking back permits us to see the present more clearly, and with that in mind, I highly recommend David Laskin’s latest book, The Long Way Home: An American Journey from Ellis Island to the Great War (just out in paperback).

The Long Way Home presents us with an American story, a World War I story, and the story of immigration in the early 20th century. In the process, Laskin provides a clarity to this time period that is enlightening, partly because it cannot help but change the way one views our country today.

Twelve Immigrants Profiled
Laskin traces the lives of a dozen men who leave their native countries to look for a better life in the United States. Each man’s story begins with his life in his country of origin and then moves forward to describe the life each finds in the U.S. The men come from all parts of Europe, and after passing through Ellis Island, they find themselves in such diverse places as the lower east side of New York City, Larimore, North Dakota, and Butte, Montana.

Though several have left their native country to avoid having to go into the military, eventually all the men find themselves enlisting the U.S. military when the country enters World War I. Many are not even U.S. citizens at the time of their enlistment, but all agree to go to war for their new home country. (At the height of U.S. involvement in World War I, nearly one in five American soldiers was foreign-born.)

One chapter, titled “The Army of Forty-Three Languages” presents the challenge of pulling together an Army where many in the group spoke little English and all had a very limited view of what it means to be American; their short time in the country has mainly involved very limited experiences working in factories or mines or farming; and because immigrants gravitated to locations where others from their native country had settled, they primarily lived in neighborhoods where they were surrounded by others who spoke their language.

Melding into A Single Group
During the course of the war, several of the men died from battle-related injuries, some emerged as heroes, and some were simply lucky enough to survive to come back to the U.S. after the war was over. What Laskin clearly expresses—and what must certainly be true of all wars—is that when the fighting begins, the soldiers are fighting to live—and to save their buddies; there is no time or emotion for contemplating that the fight is for liberty or, as Laskin writes: “…to make the world safe for democracy or because the Hun had raped Belgium or to end all wars: they fought because the lieutenant gave them orders that he got from the major. They fought to survive and to save the life of the guy next to them.”

And though they started out as men from very different backgrounds, often speaking different languages and practicing different religions, ultimately the war became a story of the transformative power of the concept of America that brought them to the U.S. shores: “In the war to come, this idea of America would lead an Italian laborer to save his wounded buddies from a hail of German hand grenades and a Jewish barber to deliver the message that rescued a battalion trapped behind enemy lines; it put a Polish farm boy on a wheat field raked by exploding artillery shells, and it won a medal for an Irish kid who had enlisted to escape the mines.”

Laskin’s research is impressive and thorough. To find men to profile where he could start the story in each man’s home country and take them through their war experiences and after, Laskin advertised in the immigrant press and through organizations such as Jewish War Veterans and Sons of Italy, to locate those immigrant veterans where there might be enough detail to make a complete story. In an email to me, he noted that two of the men, Tony Pierro and Sam Goldberg, were still living when he began his research so being able to obtain part of the story directly from each man was a bonus. After that, he relied on family recollections, journals, letters, unit histories collected by the military, and recollections of any who fought alongside those whom he was profiling.

A 2011 Footnote
Laskin also noted that he knew from the beginning that Michael Valente would be included as he was the only Italian American to receive the Medal of Honor in World War I. As it happened, the Valente family actually provided a 2011 footnote for the book. On National Medal of Honor Day, Friday, March 25, 2011, City of Long Beach officials, local and state dignitaries, veterans’ organizations and the local community all joined together to commemorate PFC. Michael Valente – one of the City’s honored sons – renaming the bridge connecting Long Beach to the Long Island mainland n his honor.

Laskin stresses that while the war was a watershed event for many people, there were few “movie moments” when everything changed. Over time, the men and their families settled in, became citizens, and their lives and experiences help embody all that it means to be a wonderfully diverse nation of immigrants.
David Laskin is also the author of The Children’s Blizzard, an account of a horrific storm in the Midwest in 1888. To read about it, click here.

1 thought on “The Immigrant Experience in the USA: Book Focuses on World War I”