Tea cup-sized dogs (or “sleeve” dogs, as they were called in the mid-nineteenth century) were a gift from Japan to then-President Franklin Pierce (1804-1869).

The teacup dogs were brought to President Pierce by Commodore Matthew Perry (1794-1858) in 1854. Perry, accompanied by gun boats, had visited Japan twice in the early 1850s to urge Japan to end 220 years of isolationism. The United States wanted to open trade with them and also gain access to a port in the Far East.

When the pact was signed on Perry’s second visit, both sides exchanged gifts. Commodore Perry left with several crates of items specifically for President Pierce (president from 1853-1857).

About the Japanese Chin

The breed itself is classified as being in the “toy breed” by the American Kennel Club. Dogs that are classified as “toy” are generally 4-7 pounds; teacup dogs are understood to be under 4 pounds when fully grown. 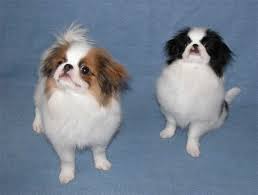 The teacup-size must have been what Pierce was given.  His dogs were described as “small enough to sit on a teacup saucer.”

The Japanese royal families were known to adore this breed of dog. They were great companion dogs, and each family bred the dogs for their own preferences. Later studies showed a great variety of sizes and traits that were unique to the dogs bred by different royal families.

The Japanese particularly enjoyed these dogs because they could be trained to entertain. A common trick was the “Chin Spin” where the dog could turn around in rapid circles on his back legs while clasping their front feet and pawing the air while they spun.

The number of “sleeve” dogs the Japanese sent along with Commodore Perry differ. He may have left with just the pair for the president or he may have had with him as many as seven. Pierce was also said to have received two birds from Japan as well, but there is little detail on this.

Pierce was thought to have kept one dog, and he gave the other to his Secretary of War, Jefferson Davis. Davis was particularly pleased with the dog and was known to have carried it with him in his pocket.

Franklin Pierce had been a very successful Congressman and rose to be a general in the Mexican War, so no one would have foreseen the personal and professional problems that would follow him into the presidency.

He was elected president in 1852, but he and his wife faced his term

of office with a heavy burden: After election, they and their 11-year-old son, the only one of their three children to survive much beyond birth, were all in a train wreck. Their son Benjamin was injured and did not survive.

Pierce was not to have an easy presidency. He was a northern abolitionist who believed that banning slavery would break up the country. This put him at odds with many in his party. He presided over the Kansas-Nebraska Act, legislation that was the first step toward the country fighting a civil war.

Pierce’s personal bad luck also continued. He was arrested while in office for running over an old woman with his horse. The case was dropped in 1853 due to insufficient evidence in 1853.

After his one-term presidency, he and his wife retired to Concord, New Hampshire, where he died in 1869. No word as to whether or not the dog or birds accompanied them.