In the early days of  rock ‘n’ roll, before MTV and the Internet, iTunes and Spotify, record companies began to gravitate to advertising their musical groups on billboards along Los Angeles’ famous Sunset Strip.  These billboards were not digital or computer-generated vinyl wraps, they were one-of-a-kind, hand-painted signs, replaced monthly.

Essentially, these billboards were works of art that required a carefully coordinated collaborative effort among multiple artists and craftspeople.  The initial concept might come from the art director, designer, photographer, record producer, or even the recording artists themselves.  From there, the idea had to be translated into working parts so that it could be assembled as a 14- by 48- foot billboard that was put up slat-by-slat.

Illustrators, stylists, typographers, retouchers, printers, technical advisors, billboard painters, woodcutters, quality-control experts, and installation crews were all needed to mount this bigger-than-life advertising medium that would be viewed by millions.

When the billboard ran its course, it was removed slat-by-slat. The wood was whitewashed for use in another sign, and the artwork that had been featured on the sign disappeared for all time—almost.

During the mid-sixties, Robert Landau, now a professional photographer, was embarking on what would eventually become a career of documenting on film the life and the surroundings of his hometown. One of the things he began detailing were these rock’n’roll billboards.  The result is his new book, Rock ‘n’ Roll Billboards of the Sunset Strip (Angel City Press).

A Kid in the Neighborhood

In the mid-sixties, Robert Landau’s parents split up, and Robert moved with his father to an apartment on Shoreham Drive just above Tower Records near the heart of Sunset Strip. 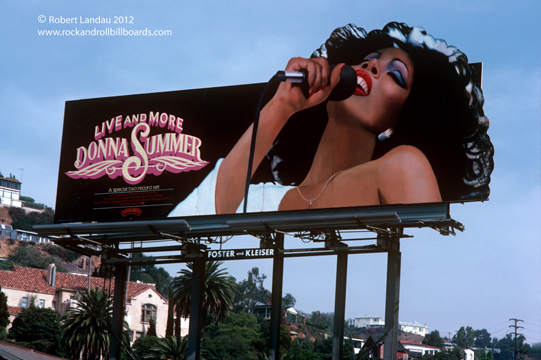 Landau was only 16 when he started snapping photographs of the billboards, but he had grown up surrounded by art.  His father ran a fine art gallery where he represented many California artists, but his personal tastes leaned toward German and Austrian Expressionism. At their home and in his gallery, he displayed and talked about what he saw as beautiful works.

Teenager Robert Landau stepped out of his new residence on Shoreham Drive, and he felt excitement at seeing the billboards. He recognized them as art that spoke to his generation and culture, and soon Landau began clicking away. Each time the billboards changed, Landau was there at his regular vantage point to document the new work in his midst.

Decades later, Landau re-discovered his notebooks filled with the Kodachrome slides, and it occurred to him that they ought to be in a book.  Landau set out to find and interview the artists, record producers, and designers who came up with the billboards. Their stories are included in the book and provide insight into both the art and the music of the era.

According to Landau, it all started in 1967 with the Doors.

The Doors were a local group, and Jac Holzman, head of Elektra Records, was trying to find a way to increase their play time on radio–that meant attracting the attention of area DJs.

Cost was an issue for the label which was small compared to the major labels, but Holzman knew the Doors’ new album that featured their chart-topping single, “Break on Through,” was worthy of attention.  As he sat in his office and looked out at the strip where the billboards advertised everything from cars to theme parks, he decided that the number of DJ’s who must drive on the Strip every day made the expense of a billboard worthwhile.

The billboard for the Doors was the beginning. That’s how the culture began.

Robert Landau’s favorite photograph and billboard is the Abbey Road billboard for the Beatles’ album, the photo that fittingly graces the cover of the book. Not only was it an eye-grabbing, attention-arresting work, but it also has a fine story with it.

Roland Young, the designer responsible for the billboard, shared the background with Landau.  Capitol Records decided it needed a presence on the Strip, but the Beatles’ records sold themselves with very little effort. The project was not given much priority, and they assigned it to Young, a junior designer in the department.

Young recognized the opportunity he was being given and decided to explore an avenue that fascinated him: the use of cut-outs in advertising, in particular on a billboard.   “I knew I didn’t even have to put their name on it…”  …and that the cut-out heads of the musicians would be framed perfectly by the blue sky.

The billboard was everything it should have been: iconic and attention-getting.  It worked so well, Landau writes, that one day Young received a call from the Foster and Kleiser, the sign company:  Some fans had climbed to the top of the sign and cut off Paul’s head, taking it as a souvenir.

Young’s first reaction was to tell the sign company that the head would be replaced.  But then he went out to take a look. Young realized the pranksters had simply taken the billboard to a new level. It had become another type of art—perhaps the first-ever interactive billboard.

And of course, that alone attracted even more attention.

The book was designed  by Frans Evenhuis and published by Los Angeles’ own Angel City Press.  “Stunningly beautiful” is the only way to describe the artistry with which they present Landau’s work.

It’s probably just as well that 16-year-old Landau hadn’t a clue what his ultimate product could be.  This way, he, too, can step back and be knocked out, just like the rest of us, by the wonder and beauty of what he has created in documenting an art and a culture that has now completely vanished.