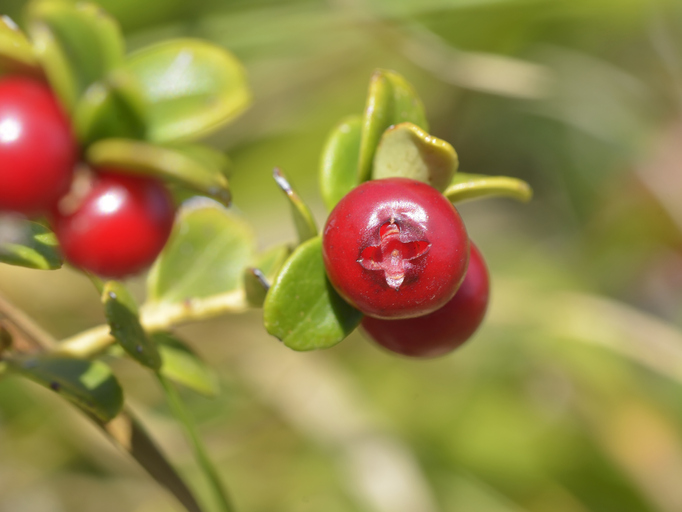 Cranberries are one of only a handful of commercially-farmed fruits that are native to North America. But the sweet relish we enjoy at Thanksgiving is quite a bit different from the original tart fruit eaten by Native Americans.

Because the berries grow particularly well in cooler climates and acidic soil, the first Native Americans to find and use the berries were tribes of the Northeast. The Algonquin knew them as sassamemesh; the Wampanoag and Lenni-Lenape referred to them as ibimi. And ibimi translates to bitter or sour berries, which describes how the direct-from-harvest berry tastes. 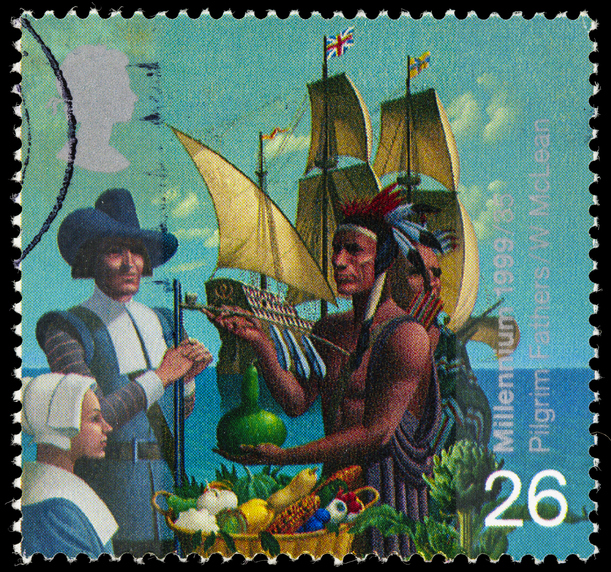 Native Americans put the berries to good use. They ate them for nutrition, and they found that they were helpful medicinally. While tribespeople would not have known they were “anti-oxidants,” they saw the good effect the berries had on someone who was ailing.

The dried fruits were also used as part of the earliest “power bars.” With no refrigeration and food hard to come by during the winter months, Native Americans created a mix of concentrated fat and protein and added the dried berries. The mixture is known as “pemmican,” and lasts for a long time. The nutritious snack was also portable if tribes were traveling.

Colonists had their own names for the berries—“Bear berries” was one name, likely because bears, too, saw the value in eating the fruit. The also called them “craneberry.” When the plant flowers in early June, the bloom looks like the head of a sandhill crane. The “craneberry” eventually became “cranberry.”

Sailors also valued the berries. Fresh or dried they could be brought on shipboard, and the berries helped prevent scurvy.

Modern palates love sweet tastes, so over time, Americans found ways to sweeten the berries. Though sugar cane was brought to the colonies by the Pilgrims, it took more than one hundred years before settlers found a way to grow sugar cane in the North American climate. 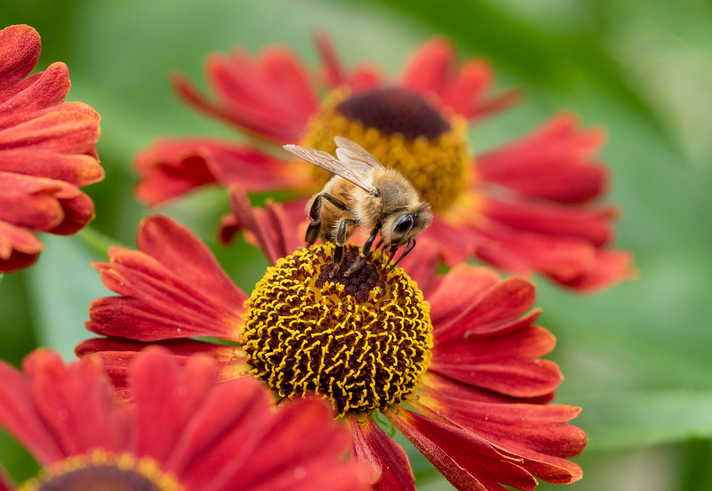 For that reason, the first successful sweetener for early Americans was honey. The British brought the first bee colonies in 1622, and the bees acclimated and produced honey.

A delicacy like honey was accessible primarily to the rich, but this was the beginning of sweetening the tart red fruit.

As the berries became popular, it was found that the plants grow elsewhere besides Massachusetts. Vines did well in New Jersey and Wisconsin. Later the plants were introduced in the states of Washington and Oregon. 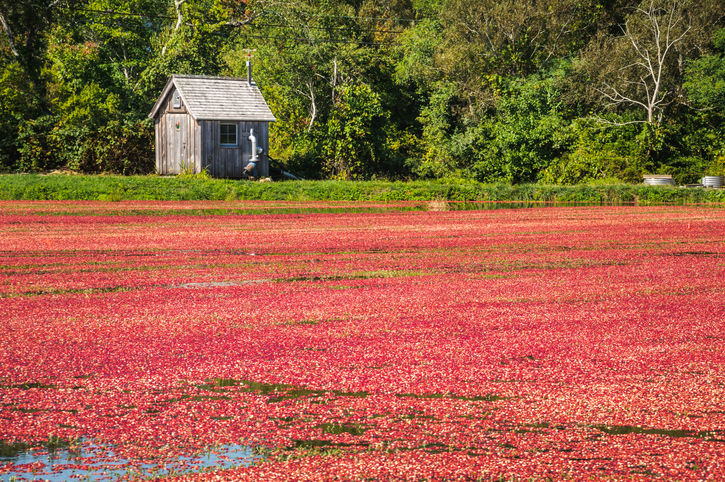 Once a cranberry bog is established, a bog can produce good crops for a surprising length of time—75-100 years. Many families who began harvesting cranberries have maintained their farms for several generations.

Cranberries are sturdy plants that grow back each year, but there is nothing easy about harvesting them. In a 1934 article in The Chicago Tribune, the reporter noted that when a field was ready to be picked, the farmer notified nearby townspeople. As many people as possible arrived and crawled on their hands and knees along the vines to pick the ripe fruit. (Pickers wrapped each finger in cloth and wore gloves to protect their hands.) The headline spoke truth: “A kneesy job.”

The Portsmouth Herald in Portsmouth, New Hampshire, credits a Captain Nathaniel Cahoon with being the first to experiment with wet harvesting cranberries. After several decades at sea, he returned to Barnstable, Massachusetts (Cape Cod) in the 1850s-60s. He planted cranberry vines in swampy part of his land that flooded regularly. He discovered that the berries loosened and fell off the vines when they sat in water for a time.

No one picked up on Cahoon’s wet harvesting process until the 1930s. Whether someone read of Cahoon’s farm or whether the process was re-discovered by someone else is not known, but commercial companies—the leader being Ocean Spray–needed a more efficient harvesting process than picking the berries by hand.

The commercial growers found that as cranberries ripened they became buoyant in water. (If you slice a cranberry to expose the center, you’ll find 4 hollow chambers that gives the berry buoyancy in water.) The water also helped loosen the ripe berries from the vines.

With wet harvesting, cranberry bogs are flooded twice. Once before the winter to keep the budding berries from freezing (the new buds appear before the ripe fruit is removed—a 16-month growing period). Then in the spring the water is drained so that the plants can grow in dry soil.

Before the first frost (generally in late October), the bogs are flooded again for harvesting.

To harvest the berries that are to be used for  juice, a water wheel is driven through the bogs to loosen the berries. If the berries are to be sold as whole berries, the loosening is done by a more gentle raking method. The next process involves corralling the berries with a floating rubber line. The berries are “herded” into a location where they can be vacuumed up and prepared for market.

A good cranberry can be red, white, or yellow-ish in color, and they are all still edible. Like all produce, some get partially smashed or are misshapen. These “imperfect” berries are not sold whole. 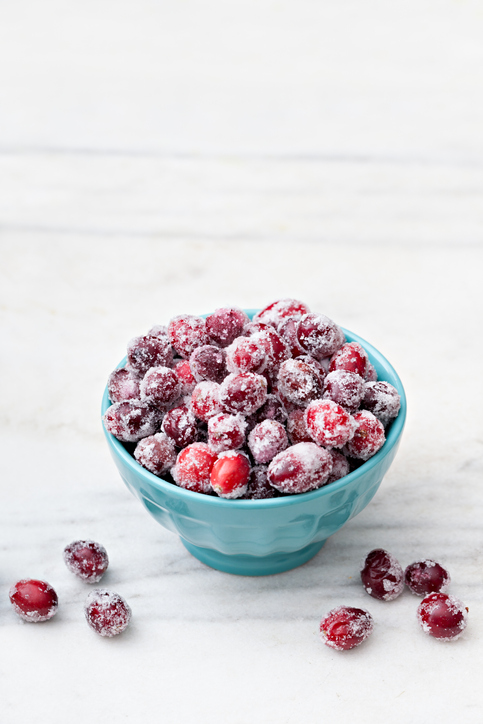 Canning was being done in the U.S. in the early 19th century (See Amanda Theodosia Jones who ran all female canning company). In 1912, Ocean Spray decided to expand their market by canning the berries. With this, they changed the nature of Thanksgiving. People loved the convenience of the sweet and readily available cranberry sauce.

Today 20 percent of all the cranberries consumed in the U.S. are sold and eaten around Thanksgiving Day. At latest calculation, that was about 80 million pounds.

Consumer interest in organic products has challenged the cranberry industry. Because the fruit is grown in wetlands, the berries are susceptible to many types of pests, pathogens and fungi. For many years, commercial as well as small farms used pesticides, but in 1959, one of the pesticides used got bad press and scared the bulk of consumers away from buying the berries that year.

This added impetus to farm organically, but it has been a tough path. A 2016 article in Quartz.com cited three farms—Fresh Meadow Farms and Cranberry Hill Farms in Massachusetts, and Starvation Alley in the Pacific Northwest as having committed to sustainable farming. In Feb 2017, Starvation Alley held a first-ever organic cranberry conference in the U.S.

Today the company no longer exists. The owners behind it say they are still working on organic growing methods for cranberries but they could not keep going with the farm itself. 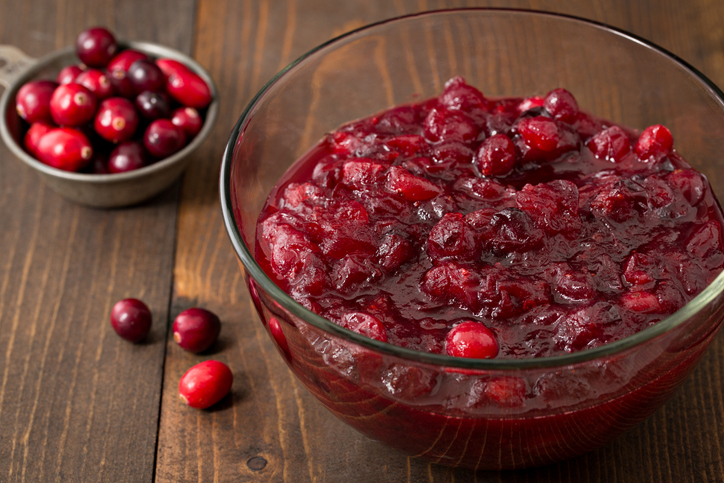 Whether you are a fan of the right-out-of-the can method of eating cranberries, or whether you’ll be working with your own recipe to make the sauce your family loves, enjoy the fact that the fruit you are using is native to this land.

And while no one knows for sure, it might quite possibly have been enjoyed at the country’s first Thanksgiving.

You might also enjoy the article about the long tradition of who provides the turkey for the White House.