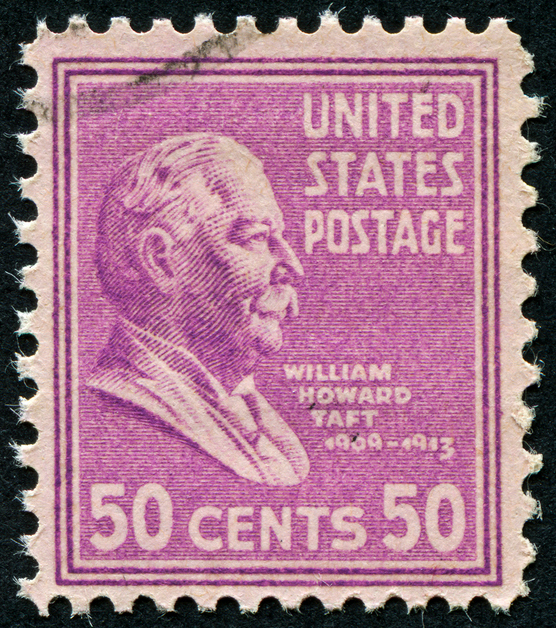 6. William Howard Taft (1909-13) was the last president to have a presidential cow at the White House to provide milk, cream and butter. Taft was also the first to have an automobile. Here is a story about Taft and dieting.

7.  Franklin D. Roosevelt (1933-45), our only four-term president, led the country out of the Depression and into the perilous years of World War II. His favorite way to relax was working on his stamp collection. One of the privileges of his presidency was that he always obtained the first sheet of any commemorative stamps that were issued during his terms of office.

8.  Most people now know that the story of young George Washington cutting down a cherry tree and confessing his deed to his father is untrue. Where did it come from? His first biographer, Parson Weems, created stories to depict the type of man he believed Washington to be.

9. Only one president had his election victory announced via Pony Express: Abraham Lincoln in 1860. The rider traveled from Fort Kearney, Nebraska to Fort Churchill, Nevada in only 6 days. It was the fastest ride ever for the Pony Express. Here is more about growing up to be Abraham Lincoln.

10. Thomas Jefferson (1801-09) was the president who conceived of the journey taken by Lewis and Clark to explore the West. When they returned, Lewis and Clark brought to Jefferson many gifts. A grizzly bear cub brought back by the expedition lived at the White House for a time. Native American objects and animal skins, horns, and bones were eventually displayed in Jefferson’s Entrance Hall at Monticello.  While the original artifacts disappeared at some point, Monticello worked with Native American groups to recreate the look of the Entrance Hall in honor of the Lewis and Clark Bicentennial.