Benjamin Banneker was not only a contemporary of the Founding Fathers but from the evidence he left, he was the mental equal of Benjamin Franklin, a man who was certainly one of America’s great minds.

Why have we heard little or nothing about Banneker? Likely because it was highly inconvenient to bring awareness to a free black man who might cause others to wonder about the theory behind the 3/5 rule–the philosophy that for the purposes of government representation, slaves were valued as only 3/5 of a person.  (The Founding Fathers were still trying to iron out some sort of compromise that did not permit Southern numbers to dominate in Congress while still developing something that the South would go along with in order to finalize plans for the government.)

Benjamin’s grandmother was a white servant in England who accidentally spilled a bucket of milk at the estate where she worked. Her punishment was being sent to America as an indentured servant to a tobacco farmer in Maryland.  She completed her time of servitude and was given some “starter” money.  From this, she was able to eventually amass some savings and buy a little land near Baltimore, Maryland. She also bought two slaves, one of whom, by the name of Banneka, she ended up marrying.

Their daughter went on to become mother to the man we know as Benjamin Banneker.  The extended family lived on the grandmother’s farm and successfully worked the land.  In the county, the family members were among only 200 free blacks, out of a population of 13,000 whites and 4,000 slaves.

Benjamin’s grandmother taught him to read, and after that, he was almost fully self-taught.  As a teenager he met a Quaker teacher, Peter Heinrichs.  Heinrichs noted Banneker’s intelligence and shared his library with him.  (Quakers in general believed in racial and gender equality.) The man and boy frequently talked until Banneker grew older and was soon needed on the farm full-time.

The Banneker family was exceedingly successful at farming.  Biographer Charles Cerami in his book, Benjamin Banneker: Surveyor, Astronomer, Publisher, Patriot,  attributes this knowledge to the people from whom Benjamin’s grandfather was descended–the Dogon people who made their home in what is now the Republic of Mali in western Africa.  These people seemed to have had an understanding of irrigation, the importance of choosing the right planting times, and the need to rotate crops—a very early concept for that time.

Among the Bannekers’ neighbors was the Ellicott family who moved to the area in the 1770s and established the Ellicott Mills (gristmills) along the Patapsco River. The Ellicotts befriended Benjamin Banneker, and Banneker was able to borrow books from them.  One of the Ellicotts was am amateur astronomer, so Banneker eventually gained access to some of the equipment the Ellicotts used for celestial observation.

Among Banneker’s accomplishments was the intricate construction of a wooden clock.

In 1753 when Banneker was 22, a pocket watch had been loaned to him for safekeeping by a friend of the Ellicotts who was going on a journey. Banneker was fascinated by the instrument and took it apart to better understand how the pocket watch worked.

He carefully sketched the components of the watch, noting how each gear had to coordinate with the interlocking one.  He then proceeded to carve a larger version of each piece out of wood. Thus he successfully built his own wooden clock that that struck the hour and kept accurate time for the remainder of Benjamin’s life—over 50 years.

Of course, he also reassembled the pocket watch in preparation for its return to the owner. 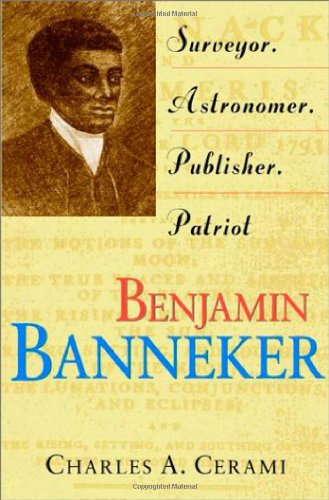 Banneker had learned surveying reading a book “Gibson’s Treatise on Practical Surveying” and had discussed the book with the Ellicotts.  In 1791 when Major Andrew Ellicott was chosen to survey the boundaries of the new district where the federal city was to be, he selected Banneker as part of his team. Celestial readings were key to measuring out the boundaries, and Ellicott knew Banneker’s excellent work in this area.  At that time, with no advanced equipment for measuring land, an astronomer used the parallax effect to ascertain distances;  Banneker’s primary job was making astronomical observations for the starting point of the survey and maintaining a clock that was used to relate points on the ground to the positions of the stars at specified times.

By George Washington’s choice, the land for the federal city lay along the Potomac River, taking sections from Maryland and Virginia. To survey what was to become the District of Columbia meant hacking one’s way through brush and fording streams to mark off an area of 10 square miles (16 km).  Ellicott’s team placed boundary stones at every one-mile point along the border of the new district.

After spending the first several months with the team, Banneker, at 59, became concerned about his farm and returned to the family land.

Some experts denigrate Banneker’s contribution to the project, but given his knowledge and the long-term friendship he shared with the Ellicotts, there is no evidence that indicates he was anything but a full team member during the time he worked on the survey.

The Importance of Almanacs

When we hear of Poor Richard’s Almanack, we generally think of the pithy sayings that Benjamin Franklin included in his book.  What is rarely pointed out is how very valuable an almanac was to the people of the late 1700s and early 1800s.  An almanac contained a calendar that gave important dates, the weather, astronomical and astrological calculations as well as poems and sayings.  For communities near the sea, the timing of the tide levels was also a vital ingredient.  All this information could greatly affect farming and travel for the upcoming year.

Following his work in D.C., Banneker began preparing material for an almanac that was first published in 1792. The full title of the almanac was descriptive as to content: “Pennsylvania, Delaware, Maryland, and Virginia Almanack and the Motions of the Sun and Moon,… “  The title goes on to note that it gives timing of the rising and setting of the sun, eclipses, judgment of the weather, dates of festivals and other remarkable days, days for holding the Supreme Court and circuits courts in the area in addition to “useful Tables and valuable receipts.”

This certainly gives the sense that the volume was of great import in households, and actually, it was often the only official book owned by a family.

David Rittenhouse, a renowned mathematician, astronomer, and surveyor in Philadelphia, was sent a copy of Banneker’s almanac for an initial read.  He wrote back that the papers reflected “a very extraordinary performance considering the colour of the Author.”

Charles Cerami’s biography notes Banneker’s reply: “I am annoyed to find that the subject of my race is so much stressed. The work is either correct or it is not. In this case, I believe it to be perfect.”

Prior to the publication of the first edition, Banneker (or perhaps Banneker in discussion with the Ellicotts) decided to send a pre-publication manuscript of the almanac to Thomas Jefferson.  Banneker knew that the correctness of his ephemeris (the celestial readings) would speak volumes to Thomas Jefferson, now serving as Secretary of State, who himself had a deep knowledge of these subjects.

Over the course of two weeks, Banneker drafted and re-drafted his cover letter to Thomas Jefferson, thinking carefully about what he was going to say and how he would phrase it.

This was a time when blacks were not permitted to be heard as witnesses in court cases, so the audacity of a black man, albeit a free black man, writing to such an important man as Jefferson was no small step.

Banneker was well aware that Thomas Jefferson’s view of “all men are created equal” did not extend to full equality for black people, and Banneker wanted a polite opportunity to make a point about this.

His letter contained a plea for justice for African-Americans, Banneker noted the contradiction of what Jefferson wrote about equality for all was countered by the “groaning captivity and cruel oppression” Jefferson used on “so numerous a part of my [Banneker’s] brethren.” (To read the letter in full, click here.)

Jefferson did not give a direct response to Banneker’s accusation but he did thank him for the almanac and noted that “no body wishes more than I do to see such proofs as you exhibit that nature has given to our black brethren, talents equal to those of the other colours of men.”

Jefferson wrote that he sent the manuscript on to the Secretary of the Academy of Science in Paris as a document demonstrating the ability of men Banneker’s colour.”  There is no record of it having been received at the Academy, however, Jefferson sent a manuscript—possibly the manuscript Banneker sent him—to a noted French mathematician and abolitionist. Jefferson’s letter touted the fact that “we have now in the United States, a negro, the son of a black man born in Africa, and a black woman born in the United States…” working to survey the federal city.  Jefferson makes claim that he himself thought of hiring Banneker for the job.

Three years after Banneker’s death in 1806, Jefferson wrote another letter indicating suspicion that Ellicott helped greatly with the ephemeris; Jefferson noted that he felt Banneker to have a “mind of very common stature.”

The Success of the Almanac

With the Ellicott’s support as well as the Society for the Promotion of the Abolition of Slavery in Maryland and Pennsylvania, the almanac achieved commercial success. Banneker went on to write and publish for the next six years.  The publisher’s forward noted with praise the accomplishment of one of “Afric’s sons.”

Banneker successfully published various editions of his almanac for the next six years.  Mixed in with the scientific were philosophical comments, essays in prose and verse, farming advice, etc.

Banneker also developed the concept that distant stars might represent separate solar systems.  This was at a time when there were no telescopes to confirm such a theory, and though a little-known Englishman, Thomas Wright, had written about the idea it was not widely picked up.  Other great thinkers like Copernicus and Galileo had never envisioned what lay beyond our solar system.

Benjamin Banneker, however, could envision it.

By 1797, sales of his almanac were slowing, and Banneker was not in great health (several sources noted that he was a heavy drinker).  The farm had become a lot for him to manage, so he gave much of his land to the Ellicotts in return for an annuity.

As he achieved a level of fame, some people came as tourists would to visit the black sage.  But there were others who were uncomfortable with a learned black man.  Banneker received threats against his life.  Occasionally he would be reading in his cabin at night, and someone would come by and take shots at or toward his cabin.

Banneker died in 1806, and on the day of his funeral, the cabin, filled with notebooks recording thoughts of a lifetime, was torched and burned to the ground.  It is hard to think this was accidental.

With the fire, Americans lost priceless documents that would have done so much to further explain the thought process and scientific knowledge of this self-taught genius.  His wooden clock which had also continued to function flawlessly was also lost in the fire.

The information scholars rely on today to better understand Banneker’s level of knowledge is Banneker’s published almanacs, as well as a few of his notebooks which he had loaned to the Ellicotts.  These were spared from the fire.