and want to move to Maine—with the dogs? Maybe you do what David Rosenfelt and his wife, Debbie Myers, did.

After spending months puzzling through the challenge of transferring their 25 dogs—many of which had health problems or were too old to be adopted by others–they ultimately rented three RVs and welcomed 11 wonderfully willing volunteers to help with the dogs. Their intention was to “drive straight through” as much as they possibly could. 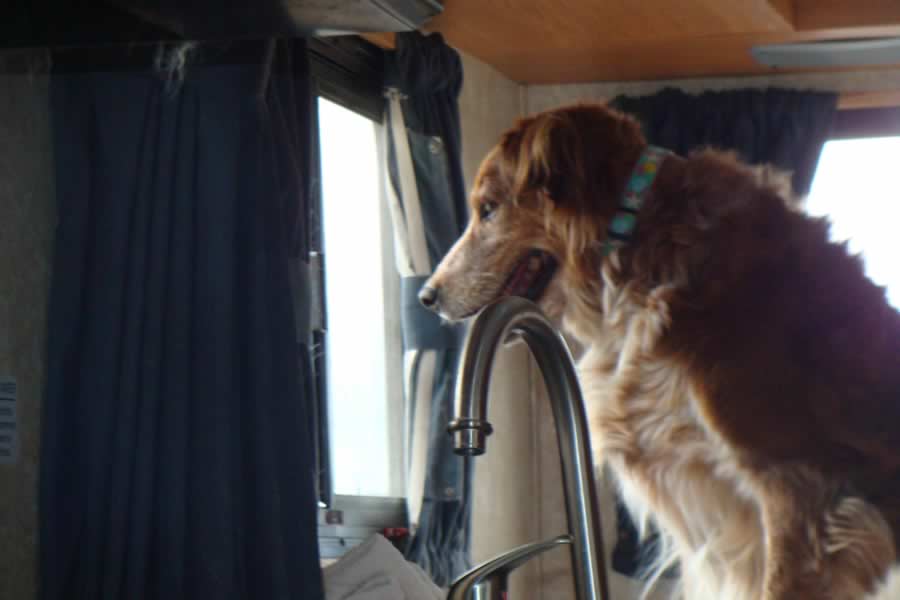 Of course, not all could go as planned with 25 dogs involved. There were the inevitable stops for dog-walking, dog-feeding, and people-feeding as well as the need for drivers to sleep. However, David Rosenfelt documents it all with great humor in his book, Dogtripping: 25 Rescues, 11 Volunteers, and 3 RVs on Our Canine Cross-Country Adventure, a truly fun read.

In an interview with Bark magazine, Rosenfelt was asked what he would do differently about the trip: “What would I do differently? I don’t think anything. We had a great group of volunteers. If everybody else had their option, they would’ve done much the same; [they just should have] left me at home. They literally say it was one of the greatest adventures of their lives.

It was just terrible, but everyone else loved it.”

The Rescue Dog Life Began with a Date

Rosenfelt’s dog adventure began with a date. He had plans to go to a

movie with a woman to whom he had recently been introduced. After the movie, David suggested dinner. His date, Debbie Myers, demurred as she needed to go home and put eye drops in her dog’s eyes.

Between the two of them they finally resolved to have dinner, meeting 45 minutes post-eye drops. The dog in question, Tara, was a golden retriever whom Rosenfelt was soon to meet and also fall in love with.

Soon Rosenfelt and Myers became a couple and Tara became the dog they both adored. About a year later, Tara was diagnosed with cancer. It was a terrible day in the household. Debbie and David helped Tara live comfortably for as long as she could. When she died it was a total heartbreak.

Rosenfelt and Myers were at a loss as to what to do. Getting another dog right away didn’t feel right to Debbie, but they wanted a way to fill the hole in their hearts. A friend suggested they volunteer at the animal shelters around Los Angeles.

After work and on weekends, the couple helped out at several different shelters. They knew their work was important, but they also knew that so many animals needed even more help.

Debbie determined it was time for a new plan. She was still working full time at a major ad agency, but together with David they formed the Tara Foundation to try to help place more animals. Because of Tara, they were willing to rescue any golden retriever they heard about that was at risk of being euthanized, but they also had a soft spot for the older dogs or those with health problems that are hard to place.

Because they wanted those dogs to live out the end of their lives feeling loved and cared for, they began bringing those dogs home to stay.

In 2010 Debbie retired to focus full time on the dogs, and they quickly expanded from four dogs to 27 dogs. Initially, they lived in Santa Monica but eventually moved to a larger space in nearby Orange County.

With the move to more space, they began to take more dogs. Some they did find homes for; others they simply brought home to keep.

trip, they went about gathering the supplies, the volunteers, and all that they would need for the adventure.  Rosenfelt does a great job of documenting the trip that they made four years ago in Dogtripping, and readers are kept laughing. Rosenfelt, who also writes the successful mystery series featuring Andy Carpenter, writes with wit and keeps his feet firmly based in reality. He sees their activities as “lunacy” but lunacy he would not give up for anything—he’s fully committed.

Once they arrived in Maine, they drove about 75 miles north of Portland to the house they owned near Damariscotta Lake. Next they undertook re-settling the dogs, sending the volunteers home with big hugs and deep gratitude, and building a new life for themselves.

In Maine unwanted dogs are a much smaller problem. Instead of running a rescue organization they now provide sanctuary for any dog that is not likely to be adopted because of age or poor health.  This summer they have 18 dogs with them, still plenty for David to have lots of company in and around his desk as he writes.

Being unable to sit down for a meal or get the dogs to move out of the recliner so he can watch television is just part of their daily life, as is feeding, dispensing medicines, cleaning up after the dogs, and generally making certain that the dogs that live with them—dogs that have been traumatized, mistreated, or in some way have seen a very dark side of life—enjoy a good quality of life and know they are sincerely loved.

Rosenfelt concludes Dogtripping with what he has learned from the experience:

“…if I’ve learned one thing during our descent into dog rescue lunacy, it’s that dogs bridge gaps between people. They smooth over the human condition, and they provide an extraordinarily valuable function. They take people of all political persuasions, religious faiths, and geographical locations and represent something that everyone can love. The value of that cannot be overstated.”

He now has two new books out: Lessons from Tara: Life Advice from the World’s Most Brilliant Dog, and his latest in the Andy Carpenter series (#13, Who Let the Dogs Out?) Life is good in their household.

2 thoughts on “25 Rescue Dogs’ Cross-Country Caravan from L.A. to Maine”