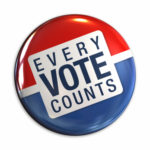 While many people look to 1920 and the passage of the Nineteenth Amendment as the start of women casting ballots in the United States, this actually isn’t true. Women in Wyoming Territory gained suffrage rights in 1869, and this was to lead the way for other western states and territories to permit women to vote. By 1914 all states west of the Rockies (except New Mexico) gave women the right to vote.

But long before women in the West were voting, women in New Jersey were permitted to vote. Early New Jersey laws defined voters as “inhabitants,” so women were eligible to vote from the first American elections on. Unfortunately, their rights were taken away all too soon, all because of a very heated local election.

When it comes to voting, a local issue is often the one that really lights a fire under the electorate. In 1806 it was a political fight over a county court house. In 1806 the Essex County court house, located in Newark, was deteriorating, and it was decided that county residents should be permitted to vote on the location of the planned-for new court house. Elizabethtown desperately wanted the court house within their town lines.

The county was alive with excitement over the issue, and it got to the point that it was unsafe for residents of one town to visit the other. Cases of assault could and did happen.

On February 10, 1806, voting began at a poll on Day’s Hill, where Elizabethtown wanted the court house to be. Reports were that all proceeded calmly for a time, but with the opening of the poll on the second day, irregularities began to appear. (Voting at this time often extended over several days in order to allow travel time for people to get in to town to cast their votes.)

By the third day, with the opening of a poll near Newark, fraud became rampant, with no effort to conceal what was going on. Men and boys voted unchallenged as they went from poll to poll casting repeat votes. Wagons were used to transport the voters more quickly. Women, black, white, single and married, voted repeatedly as well. Men and boys who wanted to vote again donned hats and petticoats so they could vote yet again at the same polling place.

The largest number of votes ever before cast in the county had been 4,500. For this election, there were nearly 14,000 votes cast. Newark had won, but the election was finally declared void.

The episode brought attention to the suffrage laws and the irregularities possible through it. In 1807, a bill was introduced limiting the franchise to free white male citizens. It passed by heavy majorities. It is unclear why women were particularly sought out to be “punished” for this shenanigan-filled election, but we can assume that New Jersey legislators were simply attempting to align themselves with neighboring states with what was the norm of the day.

From the women, there did not seem to be much reaction. There was little follow-up in the press, nor did there seem to be any public outcry. or at least the newspapers did not report on it.

Voting is a privilege and a responsibility. With this story in mind, I urge you to vote early, but please–don’t vote often!