Since last spring the literary world has been abuzz about the November 2010 release of the first volume of Mark Twain’s autobiography. Twain had left the manuscript with specifications that it not be published until one hundred years after his death, by which time he would be “dead, unaware, and indifferent.”

And since late summer the television world has been abuzz about the return of one of the most successful television series in history, Hawaii Five-O.

This confluence of excitement (although I will fully acknowledge that I may be the only person excited about both) makes this a perfect time to bring to people’s attention that in the 1860s, a young Samuel Clemens, who had only recently adopted the pen name of Mark Twain, was one of the first reporters to be sent from the mainland of the United States to the Hawaiian islands. He was on assignment for the Sacramento Union to provide their readers with information about what these fabled islands were really like.

Twain spent almost four months in Hawaii, eventually producing for the Sacramento Union 25 letters about the Sandwich Islands, as he called them. His letters were a huge hit at the time, and the merit of his work lives on. One Hawaiian native, Lawrence Downes, writing recently about Hawaii for the New York Times (5-14-06) notes that Twain provides the “best travel writing about Hawaii…that I have ever read.”

During his visit, Twain traveled to the summit of Kilauea, hiked Diamond Head, and made his way through the valleys of the islands. He also surfed, testing out the sport that locals loved even then. Twain notes that then that the natives swam naked, paddling out to wait “for a particularly prodigious billow to come along…”

Twain’s own success with the sport can be guessed at with his quip: “None but natives ever master the art of surf-bathing thoroughly.”

After an excursion to Diamond Head and the King’s Coacoanut [sic] Grove, Twain notes that he is probably the most “sensitive man in Hawaii — especially about sitting down in the presence of my betters. I have ridden fifteen or twenty miles on horse-back since 5 a.m. and to tell the honest truth, I have a delicacy about sitting down at all.” (from Roughing It in the Sandwich Islands: Hawaii in the 1860s).

Samuel Clemens longed to return to the Sandwich Islands and spent many years wondering how and if he could go back. In a later work, Twain writes of Hawaii:

“For me its balmy airs are always blowing, its summer seas flashing in the sun; the pulsing of its surf is in my ear; I can see its garlanded crags, its leaping cascades, its plumy palms drowsing by the shore, its remote summits floating like islands above the cloud-rack; I can feel the spirit of its woody solitudes, I hear the plashing of the brooks; in my nostrils still lives the breath of flowers that perished twenty years ago.”

But that first trip became a pivotal point for Samuel Clemens, and he was never able to return for a stay. His stories were so popular that his fame began to grow, and he found himself in great demand.

Writes Twain: “I returned to California to find myself about the best-known honest man on the Pacific coast. Thomas McGuire [Maguire], proprietor of several theaters, said that now was the time to make my fortune — strike while the iron was hot — break into the lecture field!

“I announced a lecture on the Sandwich Islands, closing the advertisement with the remark: ‘Admission one dollar; doors open at half past 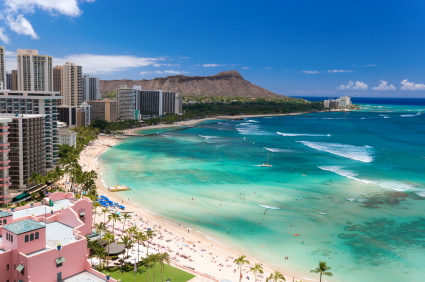 seven, the trouble begins at eight.’ ”

So if you, too, are eagerly anticipating the release of Twain’s forthcoming new work, you could help the time pass more quickly by picking up a copy of Roughing It in the Sandwich Islands — and spend your days happily enjoying Hawaii through the eyes of one of our country’s most brilliant writers. November and the new book will come soon enough.