On April 20, 2012 most of the Boston citizenry will be wearing something that designates them as the loyal Red Sox fans that they are.  Tomorrow they will celebrate the centennial their beloved ballpark with a game against the New York Yankees.  One hundred years ago on this date they played the New York Highlanders who would later become the Red Sox arch rivals–the New York Yankees.  (In that first game, the Red Sox were victorious.)

Boston Red Sox fans love their ballpark. The fans have shown little interest in a state-of-the-art stadium; they remain loyal to Fenway. Built in 1912, Fenway is the oldest ballpark still in active use in the major leagues, and very little about it has changed since its opening day one hundred years ago.

Green Monster
When the park was being revamped in the 1930s by then owner Tom Yawkey, a major fire broke out in the wooden structure near left field, and much was destroyed. To avert another similar disaster, the area was rebuilt in metal, creating what is now affectionately known as the Green Monster. (For many years, it was simply known as “the wall.”) The wall was originally just 25 feet high and separated Lansdowne Street from the outfield, but it was expanded to its current height of 37 feet in 1934 and painted green in 1947. The seats above the Green Monster were not added until 2003.

Fenway still features a manual scoreboard that is that the line score is still posted manually, adjusting 16-inch high numbers, inning by inning, as well as scores for the day’s other American games. The sign also features two vertical strips that spell out the initials of former team owners Tom Yawkey and Jean Yawkey (TAY and JRY) in Morse code. In 1934 when the scoreboard was installed it was state of the art, with lights representing balls and strikes.

Before the 2011 season, three new scoreboards beyond right-center were installed including a video board in right field.

The Red Seat
Seat 21, Row 37, Section 42 is painted red, to mark the longest home run ever hit at Fenway. Ted Williams hit a Fred Hutchinson pitch on June 9, 1946 that traveled 502 feet, further than any other hit. Since that time, Manny Ramirez hit a home run that measured 463 feet and another that hit a light tower, denying it an actual landing point, so officials have deferred to Williams’ homer as the record-holder. Babe Ruth may have hit a homerun that measured 545 feet in 1926 but this pre-dated the bleachers. 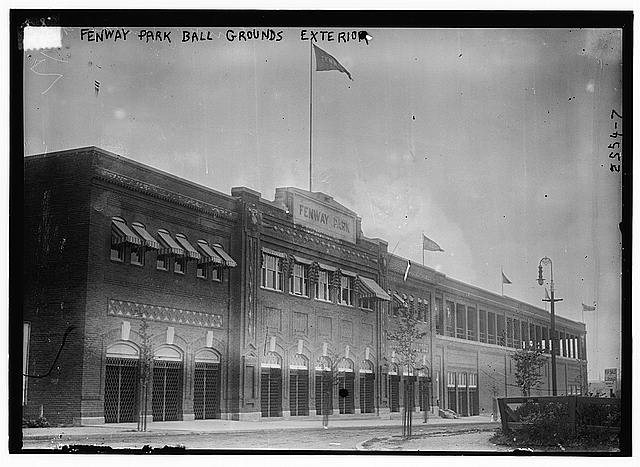 Old-Style Game Notification
And one final note from the website, www.RedSoxDiehard.com:
The older John Hancock building in Boston uses red and blue lights in its beacon to give a local three-hour weather forecast.

Flashing red is also used in the summer to mean the Red Sox game has been rained out.