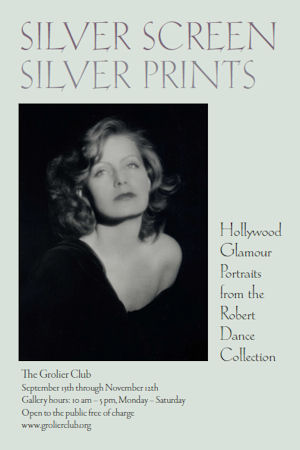 Vintage Hollywood glamour photographs are on display at the Grolier Club in New York City from September 14 through November 12, 2011. The exhibit depicts a world from the 1920s until almost 1960 when studios and studio photographers could create and control the images of their stars.

The photographs are drawn from the collection of Grolier member and art dealer Robert Dance, as curated by Anne H. Hoy. They are being shown together for the first time.

The story revealed by the exhibit is of a time before there were paparazzi. From the 1920s through the 1950s, movie studios molded the images and the careers of their stars. Before an actor or actress was sent for a screen test, they were hustled over to the portrait studio to see if they could be photographed in such a way that the studio could promote them. Because these portrait studio photographs were so important, so, too, were those who took the pictures.

Portrait shots were the specialty of the studio photographers. These were distributed to the press and welcomed eagerly by the fan clubs that were very important in building a star’s career in that day. Smaller forms of these photographs were what were sent out to individuals who wrote the studios for signed photographs.

Each studio maintained their own photographers, and the photographers themselves eventually established particular bonds with certain stars who believed that one photographer or another made them look their best and most glamorous.

The photographers were also on call throughout the shooting of “their star’s” movies. They would be summoned to the set to document continuity or to take a photograph of the star in her costume within the movie set. Those pictures, too, could be used for publicity.

Robert Dance, a New York City art dealer specializing in old masters paintings, first fell in love with these Hollywood photographs in the early 1980s. “I found the first ones at a shop on 57th Street,” he says. “At that time, few people collected photographs so they could be purchased for very reasonable prices.”

Over time, Dance actively pursued this avocation, and by now has amassed a notable collection. Some of his other photographs are on display elsewhere: Glamour of the Gods: Hollywood Portraits at the National Portrait Gallery in London. 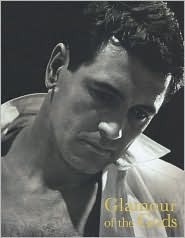 Silver Screen/Silver Prints presents Hollywood’s invention of the glamour portrait. The exhibition is divided into ten parts, each dedicated to a single photographer, star, or theme. Among the stars depicted are Greta Garbo, Joan Crawford, Clark Gable, Roman Novarro, Robert Montgomery, and the last star of the studio era, Elizabeth Taylor.

The photographers include a few independent photographers as well as those who worked full-time for the studios, including George Hurrell, Clarence Sinclair Bull, and Ruth Harriet Louise (born Ruth Goldstein), the first female to be employed as a studio photographer. Louise was only 22 when she was hired for the job and had to have a chaperoned place to live before moving from New York to L.A. She quickly established an ability to bring out the best in the stars, and was the particular favorite of Garbo when Garbo fist arrived at MGM. (Robert Dance has co-authored a book about the photographer: Ruth Harriet Louise and Hollywood Glamour Photography.)

The year 1960 was a demarcation point for change in American culture, and this began to be felt in the movie business. As stars exerted more control over their careers, studios could no longer control actors’ images, nor was it profitable to do so as actors became free agents. The drop in publicity materials and the new freedom within society in general, also led to a change in what the public wanted.

“The public became more excited about a candid photograph of Elizabeth Taylor stepping out of a Rolls Royce than they were about a retouched portrait photograph of her,” says Dance. And with this shift, freelance photographers soon found they could make big money by capturing Hollywood stars and other notables going about their daily lives.

The term for these photographers, “paparazzi” was first used by Time magazine in 1961, describing a throng of reporters surrounding a car of a princess visiting Rome. The term itself came from Federico Fellini’s 1960 film, La Dolce Vita where a character plays the part of a photographer and is named Paparazzo. “Paparazzo” itself is an Italian dialect word describing the annoyance of a buzzing mosquito.

It was the end of an era: “The movies may have made the stars, but still photographs made them icons.”

Silver Screen/Silver Prints will be on view at the Grolier Club, 47 East 60th Street, New York, from Sept. 14-Nov. 12, 2011, with the exception of October 10, when the Club is closed. The exhibit will be open to the public free of charge, Monday-Saturday, 10 a.m. to 5 p.m. Additional information and directions are available at www.grolierclub.org.