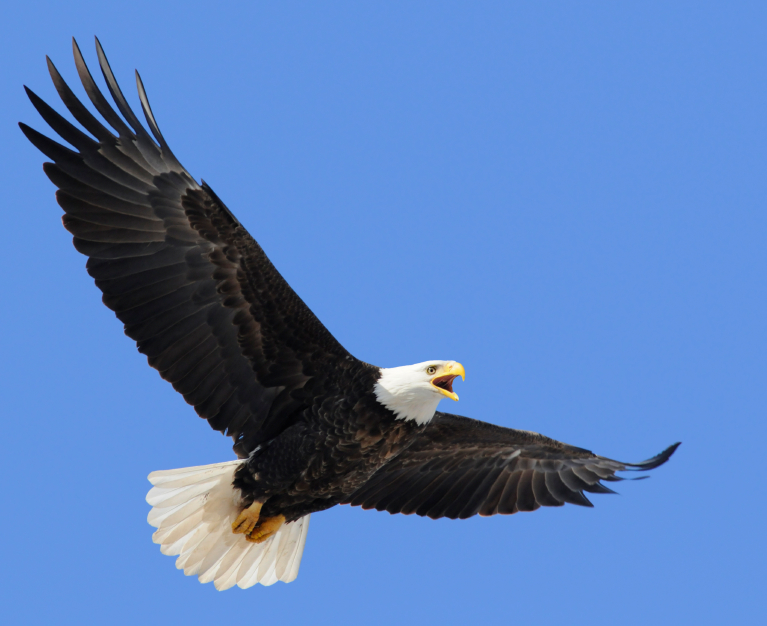 For those of us who live in one of the lower 48 states in the U.S.A., the fact that the bald eagle is our national bird seems fitting, but a bit of a reminder of the days when the Western plains were filled with herds of buffalo.

But if you live along the southeastern coast of Alaska, our 49th state, the bald eagle is a common sight. Amazing.

We have just returned from Alaska and while everyone else was watching for the blow of the next whale (also very exciting!), I couldn’t take my eyes off the sky, not wanting to miss one moment of an eagle in flight. Our guide navigated our boat past one island that had so many eagles in the trees that if an American flag or two could have been placed around the island, it would have been fully decorated for the Fourth of July.

Further along, two eagles soared and swooped as if they were members of the Air Force Thunderbird Precision Flying Team, and we learned their synchronized flying was part of a very complex mating ritual. Later we passed by a massive eagle’s nest and were fortunate enough to see a Mother in Residence. Elsewhere, I kept peering through my binoculars at what seemed to be a brown woodchuck but it remained so still I knew it wasn’t a mammal. I turned to a fellow traveler for a consult and learned that adolescent eagles don’t get their white head feathers for awhile; it was a teen eagle that had captured my attention. Stunning.

When we returned to the ship, I was grateful for an Internet connection so I could get some answers to my questions about eagles as a symbol of America. As we near the time for Fourth of July celebrations, this is a perfect moment to share with you what I have learned about our national bird, the bald eagle.

Selection of the Eagle
Before the bald eagle was designated our national bird, the eagle was selected to be a significant part of the design of the seal of the United States.

During the early 1780s the Continental Congress felt that the country should have a “coat of arms” of sorts–a symbolic representation of what the country was to stand for. Charles Thomson (1729-1824), a Patriot who was on the Great Seal Committee, consulted with scholar and Philadelphia attorney William Barton (1754-1817), among others, and it is thought that Barton suggested using an eagle with its wings spread as part of the design.

The Great Seal of the United States was approved in 1787 as a written description only, and Thomson’s words are actually quite meaningful to read as it explains so much of what our Founding Fathers had in mind for our country:

“The colours of the pales are those used in the flag of the United States of America; White signifies purity and innocence, Red, hardiness & valor, and Blue, the colour of the Chief signifies vigilance, perseverance & justice. The Olive branch and arrows denote the power of peace & war which is exclusively vested in Congress. The Constellation denotes a new State taking its place and rank among other sovereign powers. The Escutcheon is born on the breast of an American Eagle without any other supporters to denote that the United States of America ought to rely on their own Virtue.”

Two years after a seal was approved, the eagle was chosen as the national bird for its long life, great strength, and majestic looks.

Most of us have heard that Benjamin Franklin was against this choice. As it happens, John James Audubon, another respected figure, agreed with Franklin. Franklin wrote that he thought the eagle was of poor moral character: “…For a truth, the turkey is in comparison a much more respectable bird, and withal a true original native of America . . . a bird of courage, and would not hesitate to attack a grenadier of the British guards, who should presume to invade his farmyard with a red coat on.”

(Franklin is not the only wit I pay attention to; my husband noted that we are lucky things worked out as they did as eagle would not go well with cranberries.)

The Eagle in the Wild
Before European settlers arrived along the shores of northern America, bald eagles lived near major bodies of water throughout the continent— along the Atlantic from Labrador to the tip of south Florida, and along the Pacific from Baja California to Alaska. It is thought that bald eagles could be found in what would have been forty-five of the lower forty-eight states.

Bald eagles primarily eat fish, hence their practice of living near water. The eyesight of these birds is so good that they can spot a single fish from a mile away. Eagles can weigh up to 15 pounds and have wing spans of about 7 feet. They mate for life and may return to the same nest year after year. Nests are added to each time the eagles return (like true Americans, they renovate!), and some nests may reach 10 feet across.

In the wild, bald eagles are thought to live to be about 30 years old. However, many do not survive to adulthood. Firstborns may do away with siblings to get rid of competition for food, and more than half of the eaglets starve to death their first winter, due to lack of hunting skills.

As the human population expanded throughout North America, the bald eagle population decreased. Pesticides and destruction of their nesting areas are mainly to blame. In 1940 the Bald Eagle Act was passed to protect the bird. This act made it illegal to kill or possess an eagle, alive or dead, or to possess any part of an eagle, including feathers.

About 30,000 bald eagles–the largest population in the U.S.–now make Alaska their home. This number dropped during the early part of the twentieth century when salmon fishermen felt they were interfering with the salmon catch, and bounties were offered for killing them.

With statehood in 1959, the bald eagle in Alaska received federal protection under the Bald Eagle Protection Act of 1940. Then in 1973, the passage of the Endangered Species Act further solidified protection. By 1995, two decades after banning the use of DDT and other laws specifically protecting both the birds and their nesting trees, the status of the eagle was upgraded to “threatened” in the lower 48. In 2007 the Interior Department took the American bald Eagle of the endangered species list but till will still be protected under both the Migratory Bird Treaty Act and the Bald and Golden Eagle Protection Act.

There are many reasons to visit Alaska but if you came only to see our national bird it would be worth the trip.

Enjoy the Fourth of July. 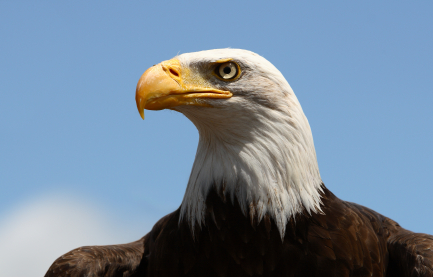 4 thoughts on “The Bald Eagle: Our National Bird”