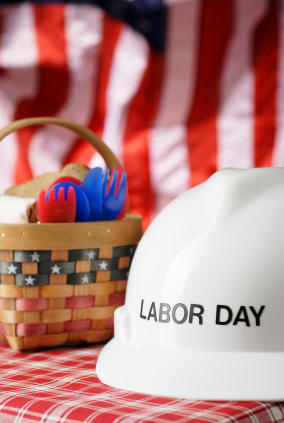 For most people today, the Labor Day weekend signals the final weekend of summer. Though some schools now start in late August, the three-day September holiday still provides many families with the last opportunity for a beach visit or a hiking trip, knowing that autumn weather, football, and the regular routine of fall school days are guaranteed to follow.

But as one might expect, the original intent of the holiday was to honor American workers, particularly those who are members of trade and labor organizations. In that spirit, I would like to take a moment to honor some of these people who helped make America great.

In some of my reading, I came across the fact that the Brotherhood of Sleeping Car Porters was the first labor organization for African-American workers that was acknowledged by the American Federation of Labor. (The AF of L was formed in 1886 and was one of the first federations of labor groups in the United States.)

That caught my interest. When we think of railroads of the past, we may think of the “romance of the rails,” or possibly the struggle of laying track throughout the United States, but rarely would we think about the working conditions of those who worked for the passenger railroads.

As I investigated it, I found that the story of those workers is more than worthy of a reminder on Labor Day, for the Brotherhood of Sleeping Car Porters is an important story of labor and color and class unrest. I would recommend to anyone interested, the book, Pullman Porters and the Rise of Protest Politics in Black America, 1925-1945 by Beth Tompkins Bates.

George M. Pullman began the Pullman Palace Car Company in 1867 with the concept that customers would pay a premium charge for luxury service and better sleeping accommodations. The Civil War had just ended, so who better to hire for the fine personal service that Pullman envisioned than former slaves who were adept at offering personal service? White men were hired as conductors but Pullman hired only African-Americans as porters.

For a time, the situation seemed ideal. For the first time, black men were finding regular employment. Though the pay was low, many worked hard and either used their income to pay for education or to put down a down payment on a home. For many, it was their first taste of middle class living.

In their work, they were required to be obsequious to all the white people traveling by train; they had to pay for their own supplies for the job which included things like shoe polish and any cleaning equipment, and in a total depersonalization of porters as people, customers were encouraged to refer to each of them as “George,” after the founder of the company.

Despite the less than ideal circumstances of their jobs, the porters played an important role in bringing information to African-American communities. They traveled throughout the United States, and took with them news of other areas as well as taking with them music and songs that were popular elsewhere in the country.

George Pullman ran a paternalistic company, and since he built a town, Pullman, Illinois, for white Pullman employees, he saw that he needed to do something for his maids and porters. Integrating Pullman, the town, was not going to happen, so he donated to black churches and other organizations in the Chicago area where the company was based. Though these efforts were well-meant, they were always on Pullman terms.

The inequities of the working conditions continued to rankle many of the porters and maids. Porters were paid about one-third the monthly salary earned by white conductors, and their work months were about 400 hours vs. 250 hours for conductors. The company justified the different pay scale by saying that porters could earn tips. In addition, the porters were expected to absorb their own costs for supplies as well as for food and accommodations while on the road.

The early organizers who started agitating for change were porters based in New York City. They were aware of two undeniable hurdles they needed to overcome to do any good for their workers. The first was that they had to take their organizing to Chicago, where most of the porters were based; they also knew they had to figure out a way to organize without the company learning ahead of time what was underway. The Pullman Company kept spies in various jobs throughout the company so that the company could nip in the bud any signs of unrest.

The plan the organizers came upon was a good one. They selected as their leader, a non-Pullman employee, Asa Philip Randolph, who was editor of a monthly magazine in Harlem, the Messenger. By using someone from outside the company, Randolph could operate without fear of reprisal. Randolph began with the group in 1925, committed to the fact that porters should be able to negotiate their own economic contract and that “the time had passed when a grown up black man should beg a grown up white man for anything.”

Perhaps the major issue that slowed progress of the Brotherhood was the fact that the Pullman Company employed so many African-Americans who were only a few steps away from relatives who had been slaves. Discrimination was rampant in most professions, so the fact that Pullman provided employment was not unappreciated. In addition, the Pullman financial support of black churches and YMCAs meant that many in the community were reluctant to go up against the company. But the injustices of the workplace kept the organizers energized, and ironically, a key turning point in the Brotherhood’s campaign came about when they gained the aid of women.

In 1913 the women of Illinois–black and white–gained suffrage rights, and the organizational tools the women who had fought for suffrage became beneficial to the Brotherhood of Sleeping Car Porters’ campaign for what they viewed as “full citizenship” for black men.

After Randolph took the helm, it took ten more years’ effort through some of the toughest economic times our country has seen. Finally federal changes in the Railway Labor Act in 1934 meant that by 1935, the Brotherhood won certification to represent the porters. At that time, the American Federation of Labor fully recognized the all-black organization. Two years later the Brotherhood signed its first collective bargaining agreement with the Pullman Company; they gained pay increases, a shorter work week, and the right to overtime pay.

Ultimately, the leadership and skills gained by members who were part of the Brotherhood went on to be used in organizing the U.S. civil rights movement.

Though there are many groups that organized to protect the downtrodden worker, the actions of the Brotherhood of Sleeping Car Porters, and the women who helped them with their campaign, seem very worthy to acknowledge as we approach this Labor Day.

3 thoughts on “A Group that Made a Difference: The Brotherhood of Sleeping Car Porters”