Great news for air travelers… 2012 is showing that airline accidents are on the decline.  The stats are better than any year since 1945 when there would have been far fewer flights than today.  But passengers have a great deal more than safetey to be grateful for. Read about some of the early tales of air travel: 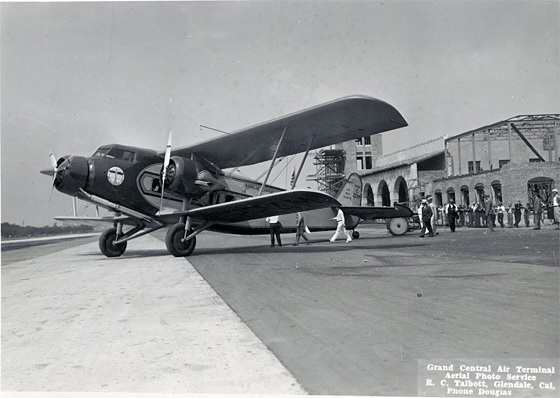 Before there were passenger flights there were regularly scheduled flights for the U.S. mail, and these flights actually opened the air to to passengers. As early as 1926, Western Air Express (the predecessor of TWA) started carrying one or two passengers, as the mail allowed. These planes were open air planes, and the passengers sat on mail sacks behind the pilot.

Airlines began to promote passenger air travel starting in the late 1920s. In 1928, Boeing introduced the Model 80, which had 12 leather-upholstered seats for passengers. Each seat had a reading lamp, and there was some forced-air ventilation but the smells of the engine still came into the cabin. Pilots who were accustomed to flying in open cockpits had to adjust to working from within a closed one in these bigger planes.

The flights were extremely bumpy because the planes could not climb to the higher altitutudes. The Ford Trimotor airplane could fly up to 6,000 feet but the ascent was jerky and slow. The Boeing 80 could reach 14,000 feet but even there the ride was still bumpy. Cruising speed was about 125 miles per hour vs. 500-600 mph today.

By the mid-1930s, plane travel was becoming more comfortable. The Douglas DC-2 and DC-3 featured soundproof cabins, fresh air ducts, and upholstered seats. Some models of the DC-3 offered sleeper compartments. These later planes could fly at an altitude of 20,000 feet, which reduced but did not eliminate turbulence.

Flying at this time was intended to be an elegant experience. Cabin service featured crystal stemware and fine china. Through the 1950s people dressed well to fly. Men wore suits and women wore hats and dresses.

Before There Were Flight Attendants

The original flight attendants were men, who were referred to as flight companions or stewards. They had to be small in stature to maneuver around the cabin, and they served as ticket agents, bag handlers, and because people were nervous about flying, they were expected to help calm the passengers during the flight.

On May 15, 1930, Boeing Air made news by announcing a roster of all-female flight attendants. Ellen Church, a registered nurse, was the woman who had led the campaign to put women to work on flights; the argument she used was that nurses were best prepared to help patients through bouts of air sickness. Boeing bought into Church’s argument, and the first women hired were nurses. They were referred to as stewardesses, and like the male stewards, they too helped with ticketing and carried baggage.

Requirements for eligibility were strict: the women had to be 20-26 years old and no taller than 5’4″, and they could not weigh more than 118 pounds. They also had to be single, a rule that existed for most airlines into the 1960s.

So when you enter the crowded cabin of 2013 and settle into your narrow seat with little leg room, just remember, things could be worse!